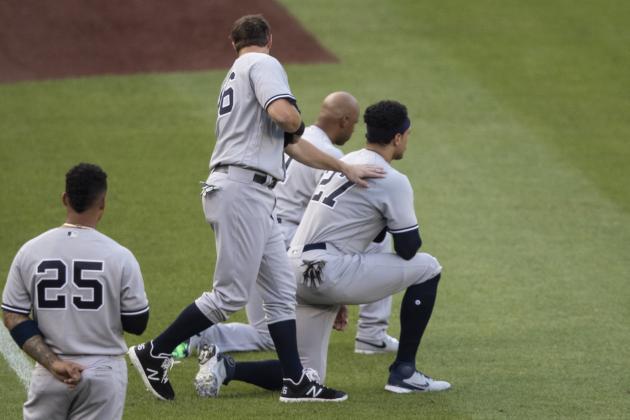 New York Yankees outfielder Giancarlo Stanton will continue to kneel during the national anthem this season as a protest against racial injustice.

"To show that we're still in this fight," Stanton explained Saturday, per Gabe Lacques of USA Today. "We have to keep the movement moving forward.

"For basic human rights in America. For equality. For all of us to have a fair shake."

Stanton and teammate Aaron Hicks both took a knee during the national anthem before the Yankees' second game against the Washington Nationals on Saturday:

This was separate from the Opening Day demonstration, with players on both teams kneeling before the anthem.

Major League Baseball has embraced different forms of protests to start the season, with players also allowed to wear "Black Lives Matter" and "United For Change" patches on their jerseys. Some teams also have "BLM" stenciled on the mound.

It's been a different reaction compared to three years ago, when only Oakland Athletics catcher Bruce Maxwell kneeled during the anthem.

Stanton and Hicks explained their plans to kneel with teammates in a meeting Wednesday ahead of the season opener. Second baseman DJ LeMahieu stood for the anthem but showed support by standing next to Stanton and Hicks with an arm on their shoulders.