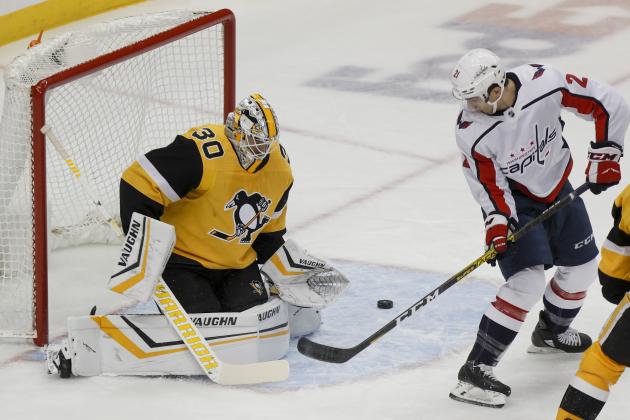 First came the name, then came the coach and now Bleacher Report's mock NHL expansion team has a full roster.

With feedback and comments from B/R app users helping guide the draft process, the theoretical Quebec City Gray Wolves embarked on their inaugural—and simulated—season with Gerard Gallant leading the charge behind the bench.

While it wasn't anything like the year Gallant had when the Vegas Golden Knights reached the Stanley Cup Final in their opening season, the Gray Wolves put together a solid campaign with plenty of room for improvement.

The team finished with a record of 38-40-4 (80 points) and sixth in the Atlantic Division behind the Boston Bruins, Buffalo Sabres, Tampa Bay Lightning, Montreal Canadiens and Florida Panthers.

Here's a look at who app users targeted in B/R's fictional expansion draft, where things went wrong in 2020-21 and how to correct it moving forward.

Goalkeeping is the obvious takeaway here.

No expansion team is going to be able to grab a top-20 goalie, but Quebec City did perfectly well in drafting Matt Murray from the Pittsburgh Penguins and Jonathan Quick from the Los Angeles Kings.

The tandem has won a combined four Stanley Cups, and both provide a veteran presence between the pipes.

Quick rebounded well in 2019-20 with a 90.4 save percentage and 2.79 goals-against average after the worst year of his career in 2018-19. At 34, he may not have too many years left in him, but if he's not doing the bulk of the work in net, Quebec City can prolong his career a bit and keep him fresh.

With Murray, 26, the Gray Wolves are buying low on someone they believe can regain his form. It's a bet worth taking, as the Pittsburgh Penguins netminder has a career 2.67 GAA and 91.4 save percentage—not to mention a 2.16 GAA and 92.1 save percentage in 48 playoff games.

Scoring depth is another area the Gray Wolves can feel good about as they continue plotting their future.

The bottom six forwards for Quebec City feature a strong blend of youth, experience and playmaking. Sam Bennett is still just 24 and had four straight seasons with at least 25 points before the pandemic-shortened 2019-20 campaign. Richard Panik is another guy who can get between 15 and 20 goals per year while providing solid defense.

The Gray Wolves are also buying low on the speedy Andreas Athanasiou, who is always a threat to create a breakaway. A 30-goal campaign in 2018-19 with the Detroit Red Wings made it seem like Athanasiou was starting to tap into his full potential, but a year later his stick went cold and a trade to Edmonton relegated him to a depth role.

It's usually not a great sign when there's only one consistent 20-plus goal scorer among the top six forwards.

As solid as the scoring depth is further down the roster, that hardly makes up for a lack of points at the top.

James van Riemsdyk is the crown jewel of the lineup and the one guy who can be counted on to put up points. The skaters around him are all relative question marks.

Alex Nylander looks like he could develop into a solid top-six forward, but at 22 and having yet to play a full season, the jury is still out. That goes for Ryan Donato too. Four years into his career, he hasn't quite made the leap into an offensive star.

Frank Vatrano has surpassed 20 goals once before. It's just unclear whether that was a fluke or whether he's starting to break out. Jordan Eberle seems to slot into the top six by default, but it wouldn't be surprising if he's relegated to a reduced role if his numbers continue to decline.

Nylander, Athanasiou and Nick Ritchie have plenty of potential to become game-changing forwards.

They are not alone as the only up-and-comers in Quebec City, either. The defensemen assembled through the expansion draft should give the Gray Wolves plenty of hope.

Henri Jokiharju is just 21 with two seasons under his belt. The Chicago Blackhawks considered him a top prospect before dealing him to Buffalo after the 2018-19 season. A strong skater who's comfortable joining the rush, Jokiharju could end up being the steal of the draft if he reaches his potential.

Carl Dahlstrom, 25, is another former Blackhawks prospect who projects well as a top-four defenseman. With only 64 games total to his name in three seasons, he's still a project but offers solid upside—especially at 6'4", 231 pounds.

There's also defenseman Markus Nutivaara, a Finland native like Jokiharju, who emerged from the seventh round of the 2015 draft to crack the Columbus Blue Jackets roster only a year later.

Each of the players mentioned above needs time to develop. There's no question about that. But they also possess the talent to become cornerstone pieces in Quebec City. If the Gray Wolves connect on even a quarter of them, the foundation for a contender becomes a lot more clear.

Gallant has his work cut out for him, but a failed (simulated) campaign in 2020-21 isn't all his fault.

Forward Jesper Fast played just eight games because of injury, while Nylander only suited up for 10 games for the same reason.

The lack of offense at the top of the lineup was painfully obvious on special teams, where the Gray Wolves finished with the worst power play in the league—both in power plays drawn and power-play goals scored. No team is going to sustain success across a full season without prevailing on the man advantage.

Murray finished with a record of 27-30, while Quick went 11-10. Not quite the bounce-back seasons B/R app users had in mind during the draft.

At least with a solid draft position, the Gray Wolves should be able to get a head start on addressing their scoring needs in the offseason.