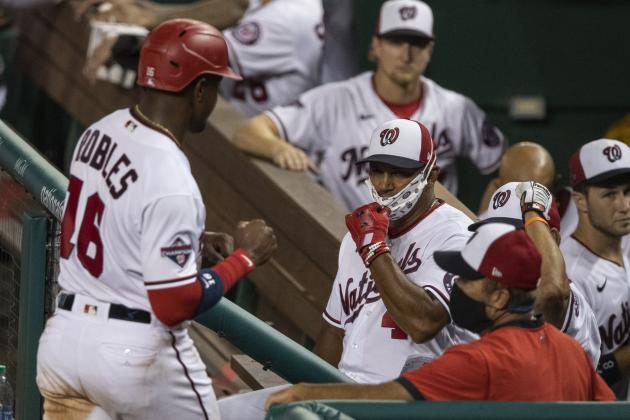 The Washington Nationals have evened up their three-game series against the New York Yankees thanks to a 9-2 win on Saturday at Nationals Park.

Following Thursday's rain-shortened 4-1 loss, the Nationals received bad news before first pitch today. Stephen Strasburg was scratched from his start with an injury to his right hand. Erick Fedde took the mound to open the game and handled New York's powerful lineup well.

The Yankees countered with James Paxton, who was making his season debut after undergoing back surgery in February, but it wasn't the start he was hoping for.

The Nationals know their offensive success will hinge on their ability to replace the production they lost when Anthony Rendon signed with the Los Angeles Angels in December.

One obvious candidate to emerge as a foundation piece is Victor Robles. The dynamic center fielder has been on the prospect radar essentially since he signed as an international free agent in 2013.

Robles offered a glimpse of what his ceiling can be Saturday against the Yankees.

I think we may have forgotten that Victor Robles is still just 23.

Victor Robles hits a two-run homer off the left field foul pole and the Nationals lead 5-2 in the fourth. Big night for Robles so far through two ABs: HR, 2B, four RBI and a run scored.

It would be unfair to expect Robles to be an exact replacement for Rendon, who hit .290/.369/.490 and averaged 24 homers in seven seasons with the Nationals.

But if Robles can build on his offensive performance and remain the best defensive center fielder in Major League Baseball this season, the Nationals could be one of the best teams in the NL.

James Paxton's Rough Outing Is Cause for Concern

Under normal circumstances, a pitcher having a bad start in his first appearance of the season wouldn't be a reason to panic.

For Paxton, though, lasting just one inning should raise some red flags for the Yankees. Signing Gerrit Cole gave them a legitimate ace to lead the rotation in a playoff series, but there are questions about their depth behind him.

James Paxton has allowed 2 runs in the second inning this evening.

He allowed 3 runs in the second inning in the *entire 2019 regular season*.

Luis Severino is out for the season after undergoing Tommy John surgery in February. Masahiro Tanaka posted a 4.45 ERA in 2019.

Paxton is a strikeout machine at his best—he led the team's starters with 11.1 per nine innings last year—but durability has never been a strength for him. The southpaw hasn't made 30 starts or thrown more than 160.1 innings in a season.

In May, Paxton told reporters he was fully healthy after his back surgery. If this is what the completely healthy version of him is going to look like in 2020, with decreased velocity and erratic command, the Yankees will be in trouble.

The Yankees and Nationals will wrap up their three-game series Sunday at 1:05 p.m. ET.