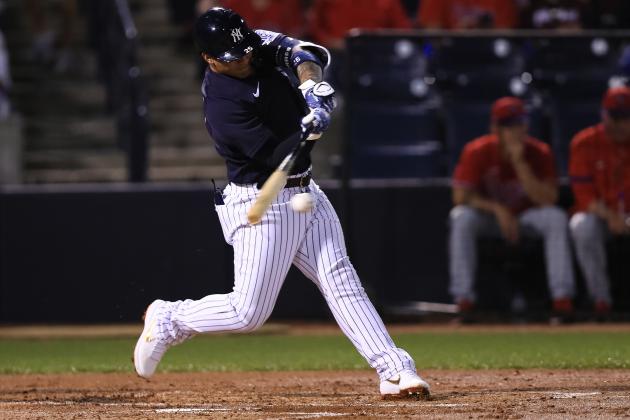 New York Yankees shortstop Gleyber Torres left his team's road game against the Baltimore Orioles on Thursday with a right elbow injury, which the team later revealed was diagnosed as a contusion after X-rays came back negative.

Torres said after the game that he's feeling better, though there is some soreness:

Although he wasn't sure of when he'd return to the lineup, he noted he doesn't have a problem throwing.

While at bat in the first inning, Torres was hit in the right elbow following a pitch from O's left-hander John Means. Torres crouched on the ground in pain but eventually stayed in and came around to score following a Luke Voit grand slam.

Torres had one more at-bat that resulted in a third-inning fly ball and played defense in the bottom of that frame, but Tyler Wade replaced him before the bottom of the fourth.

The 23-year-old is hitting .200 (3-of-15) with one home run and two RBI through four-plus games, although that slower start is certainly not symbolic of his MLB career. He has dominated in the bigs in just two years, making the All-Star Game in 2018 and 2019.

The former Chicago Cubs minor leaguer has been sidelined due to injury in the past. A torn UCL in his left elbow forced him to undergo Tommy John surgery in June 2017 and miss the rest of the season. He played for Triple-A Scranton/Wilkes-Barre at the time.

A right hip strain forced him onto the 10-day injured list in 2018. He had a few injury scares in 2019: a core muscle that forced him to be hospitalized for a day and a right hamstring that kept him off the field for two games.

If Torres is forced to miss time, then Wade figures to fill in. In 43 games last season, the four-year veteran hit .245 with two homers, 11 RBI and seven stolen bases. He entered Thursday 1-of-2 with a run in 2020.