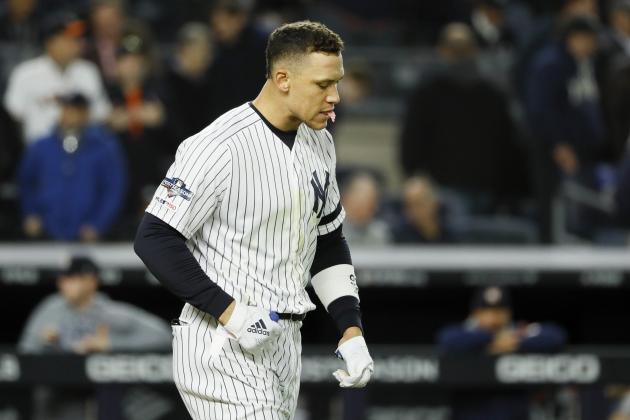 New York Yankees slugger Aaron Judge is "champing at the bit" to get some swings in as he recovers from a fractured rib, according to Yankees hitting coach Marcus Thames.

Thames appeared on the Yes Network on Thursday and spoke about Judge, among other topics (3:45 mark):

Aaron Judge hasn’t resumed swinging a bat, but Thames said, “When the doctors turn him loose, he’ll be ready. He’s champing at the bit to get out there.” https://t.co/ExaWf877HE

Judge, 28, missed time in February and March during spring training with the injury, which is believed to have happened in September. But earlier in May, manager Aaron Boone provided an optimistic update on Judge's recovery.

"This time down has allowed that rib, that bone to hopefully continue to heal," he said on SiriusXM's MLB Network Radio. "All signs are encouraging there. Hopefully, this time down allows that rib to heal properly and hopefully have him part of all this as well."

Had the COVID-19 pandemic not delayed the start of the 2020 season, the Yankees would have opened without Judge, Giancarlo Stanton, James Paxton and Aaron Hicks, all of whom have been working through injuries.

Getting Judge back to full strength is key for a Yankees team with World Series aspirations. Injuries have cost him 110 games over the past two seasons, though he's still raked 54 home runs combined. Last year, he hit .272 with 27 dingers, 55 RBI and 75 runs.

Staying healthy in general will be huge for New York, which suffered a record-setting number of injuries in 2019. Judge may be champing at the bit to get in the cage, but the Yankees will likely bring him along slowly, hoping to get as many games out of him as possible this year.