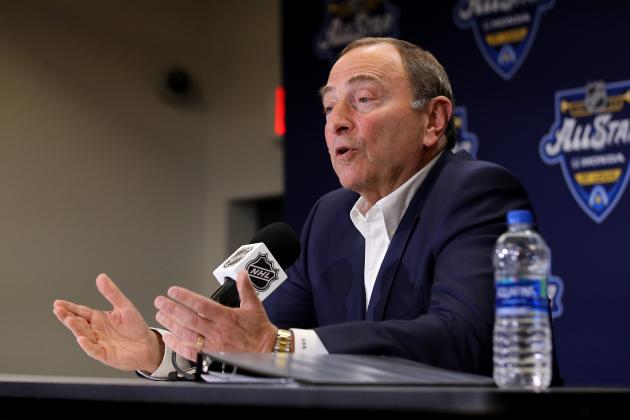 As the NHL continues working out the details of its plan to restart the 2019-20 season, Commissioner Gary Bettman said the league is evaluating "probably eight or nine different places" to stage games.

"I don't think anybody has a fixed timetable, particularly in North America right now. We have been working very hard since we took the pause on March 12 to make sure that whatever the timing is, whatever the sequencing is, whatever physical ability we have in terms of locations to play, that we're in a position to execute any or all of those options. There is still a great deal of uncertainty."

A few sports leagues have returned (the Korea Baseball Organization, German Bundesliga and NASCAR), all of which are happening behind closed doors.

At the end of last month, ESPN's Greg Wyshynski reported the NHL was moving on from a proposal to play games in North Dakota. Instead, the league was looking into using two to four cities as its home bases.

According to The Athletic's Pierre LeBrun and TVA Sports' Renaud Lavoie, a more recent plan would shift the NHL's structure to four six-team divisions and rely upon four different venues.

Darren Dreger of TSN followed up Monday and reported two cities could house 12 teams as part of a restart. TSN's Bob McKenzie speculated Las Vegas would be one option, while Ryan Rishaug tweeted the Edmonton Oilers "feel they could manage as many as a dozen teams in Edmonton if needed."

With the NHL still nailing down the logistical details, on-ice action could be more than a month out at minimum.