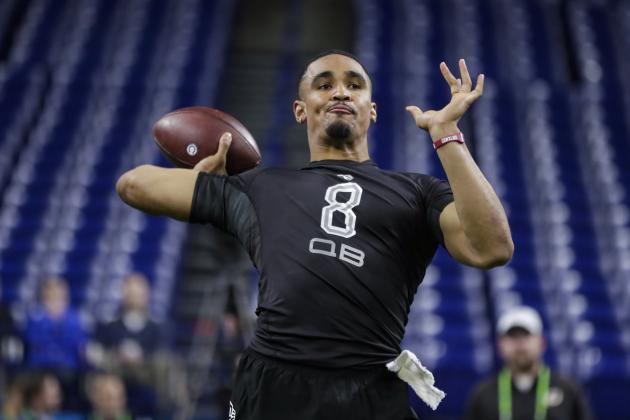 Several quarterbacks came off the board in the 2020 NFL mock draft released by ESPN's Mel Kiper Jr. on Tuesday, including Oklahoma's Jalen Hurts, who went to the Pittsburgh Steelers in the second round.

Joe Burrow, Justin Herbert and Tua Tagovailoa all went in the top six, as expected, but three other quarterbacks came off the board in the first two rounds of Kiper's mock.

Utah State's Jordan Love was the only other quarterback to go in the first 32 picks, as he went 19th to the Las Vegas Raiders, while Washington's Jacob Eason went 44th to the Indianapolis Colts and Hurts went No. 49 to Pittsburgh.

With veteran quarterback Ben Roethlisberger missing all but two games because of injury last season, the Steelers went 8-8 and missed the playoffs. That is despite the fact that they had one of the NFL's best defenses.

The primary reason for Pittsburgh's struggles was the poor play of quarterbacks Mason Rudolph and Devlin "Duck" Hodges, neither of whom were suitable replacements for Big Ben.

Roethlisberger will be back in 2020, but at age 38 and coming off elbow surgery, it is far from a certainty that he will return to his Pro Bowl form.

Some question marks remain about Hurts as a passer, which is why he isn't a first-round prospect, but he improved enough last season to get himself in the Day 2 conversation.

After spending the first three seasons of his college career at Alabama and winning a national championship, Hurts transferred and played at Oklahoma last season. He shined in head coach Lincoln Riley's system, completing 69.7 percent of his passes for 3,851 yards, 32 touchdowns and eight interceptions, while also rushing for 1,298 yards and 20 touchdowns.

Mayfield and Murray went No. 1 overall in the 2018 and 2019 NFL drafts, respectively, and while Hurts won't follow in their footsteps, his stock appears on the rise.

Since Pittsburgh's defense is so strong, Hurts could be a great fit as someone who can make plays with his legs and complete the high-percentage throws should Roethlisberger get injured again or struggle in 2020 and beyond.

While Hurts was a stud last season, Love took a huge step backward after a career year in 2018 at Utah State. He threw for 3,567 yards, 32 touchdowns and just six interceptions as a sophomore, but his junior year saw him throw for 3,402 yards, 20 touchdowns and a whopping 17 interceptions.

That lack of ball security is concerning, but teams are so enamored with the 6'4", 224-pound Love's size and skill set that it seems likely he will go in the first round.

Derek Carr is the Raiders' starter, but he has thrown 22 or fewer touchdown passes in each of the past three seasons and isn't considered an elite signal-caller despite being a three-time Pro Bowler.

Carr did complete a career-best 70.4 percent of his passes last season, but his career record of 39-55 leaves something to be desired, and there is no doubt the Raiders could improve at QB.

It is far from guaranteed that Love will turn out to be a better NFL signal-caller than Carr, but since Las Vegas owns two first-round draft picks, it can afford to take a chance.