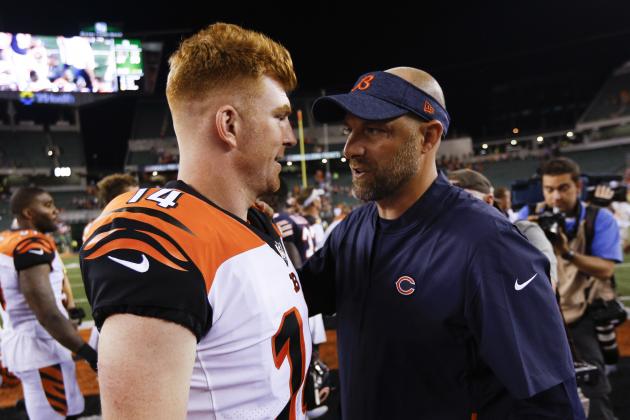 For a team that publicly committed to quarterback Mitchell Trubisky as their starting quarterback in 2020, the Chicago Bears keep finding themselves linked to available signal-callers around the league.

First, it was Las Vegas Raiders quarterback Derek Carr who was rumored to begin next season in Chicago. Now, Cincinnati Bengals quarterback Andy Dalton is being connected to the Bears.

According to Paul Dehner Jr. of The Athletic, the team has been in touch with Chicago as it assesses its options to move on from Dalton. Cincinnati is expected to select Joe Burrow first overall in April's NFL draft.

Dalton is still only 32 years old and could provide solid competition for Trubisky in camp as the organization assesses what it has in its three-year veteran. The TCU alum passed for 3,494 yards, 16 touchdowns and 14 interceptions last season for a Bengals team that won just two games.

The record is partially a reflection of Dalton's ability, but it's hard to pin all of the team's woes on him given the loss of wideout A.J. Green for the year with an ankle injury and a defense that ranked among the worst in football with an average 26.2 points allowed per game.

Those issues would hardly follow Dalton to Chicago should he land there. The Bears boast one of the league's fiercest defenses, anchored by Khalil Mack, while receivers Allen Robinson II and Anthony Miller remain more than capable in the passing game—to say nothing of a backfield with David Montgomery and Tarik Cohen.

Trubisky threw for 3,138 yards, 17 touchdowns and 10 interceptions in that offense last season, which produced a 40.6 QBR—29th in the league.

Dalton was even worse with a 37.0 QBR (31st) but, as Dehner notes, would be reunited in Chicago with offensive coordinator Bill Lazor.

Whether that's enough to get the Bears to make a deal for Dalton remains to be seen. The Athletic's Lindsay Jones previously reported Dalton could cost teams as much as a second- or third-round pick via trade. Chicago has two second-rounders in 2020 but nothing in the first, third or fourth rounds.

We'd like to send you the most entertaining Chicago Bears articles, videos, and podcasts from around the web.