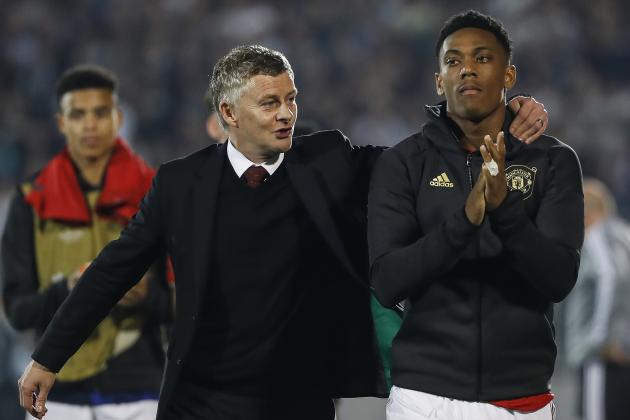 Manchester United manager Ole Gunnar Solskjaer has demanded more of Anthony Martial as a No. 9 despite the forward scoring in each of the club's past three games.

The Red Devils host Club Brugge on Thursday in the second leg of their UEFA Europa League last-32 encounter, with Martial seeking to get on the scoresheet in a fourth consecutive match.

The Frenchman is on track to set a new personal best for goals in a single season after being played up front this term, and Solskjaer told MUTV he expects more following that transition:

"If you're a wide forward, you're facing forwards more and running at people. Now he's in a different position, where it is more physical and you've got to be stronger with your back to goal and be more patient. It's your job to be in the box when the ball arrives. I'm still at him. I demand more of him. Sometimes, the ball is squared across the six-yard line and it's where he should be. I just nudge him and say: 'It should have been a goal for you.' Scoring 25 instead of 15 is a big difference for a No. 9."

The 24-year-old joined the Red Devils from Monaco in September 2015, having played mostly as a centre-forward, though the competition at Old Trafford has seen him fielded largely out wide in recent years.

The 2015 Golden Boy has 10 goals in 21 Premier League games this season and netted United's second during Sunday's 3-0 home win over Watford following some superb composure under pressure:

Solskjaer's need for a natural finisher is greater since forward Marcus Rashford suffered a double stress back fracture in January, putting the rest of his season in doubt.

Statman Dave attested to the two team-mates boasting a similar strike record at United, having both debuted for the club during the 2015-16 season:

Marcus Rashford scored his first senior goal for Manchester United four years ago today. He has more goals for the club (64) than any other current player:

Homegrown star Rashford has one goal more for United than Martial despite making four fewer appearances, though the former has benefited from a more advanced role. That being said, Rashford has made only 137 starts in those 201 appearances, while Martial has made 153 starts.

The early signs indicated Martial would bring something special to the Theatre of Dreams. He scored a sensational solo goal in a 3-1 win over Liverpool when he made his debut in September 2015. He netted 17 goals in 49 appearances across all competitions during that first season at United—11 in the Premier League—though he's required only 31 games to reach 15 this campaign.

He displayed great determination to capitalise on Club Brugge's error in defence when he scored United's equaliser in the 1-1 draw in Belgium last Thursday:

Romelu Lukaku and Alexis Sanchez (on loan) each left the club for Inter Milan last summer, with no recognised replacement brought in at the time to account for their departures.

January signing Odion Ighalo has yet to earn a start for his loan club, while the 18-year-old Mason Greenwood's first-team involvement is still sparing, leaving United light on senior options up front.

Martial has started in four of United's past five European games and could look to continue his evolution up front under Solskjaer if he retains his place in the starting XI for Club Brugge's visit to Old Trafford.