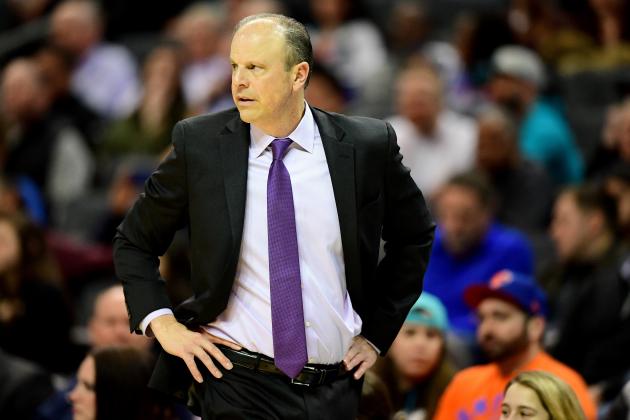 Even if he isn't the team's head coach, Mike Miller may remain on the New York Knicks staff for the 2020-21 season.

Miller took over as the interim coach in December following the firing of David Fizdale. SNY's Ian Begley reported Wednesday that "some prominent people at Madison Square Garden remain in support of giving Miller a role within the organization regardless of what happens with the coaching search this offseason."

The Knicks have gone 13-19 with Miller in charge, an improvement on the 4-18 start before Fizdale's ouster.

Some of that could be a regression to the mean. The front office didn't assemble a playoff-caliber roster in the offseason, but there was too much talent to think New York would maintain what was a 15-win pace to the season.

Begley's report comes a day after Steve Stoute, a brand consultant for the Knicks, indicated on ESPN's First Take the franchise was going to make sweeping changes.

Steve Stoute says he wasn't responsible for Knicks firing Steve Mills as team president.
"But there had to be a change. So there is a change. That change will bring a new coach and new coaches that are going to help develop these younger players. They got some young superstars." pic.twitter.com/6jB25C8w4v

The Knicks issued a statement walking back Stoute's comments, saying he "does not speak on behalf of New York Knicks personnel and basketball operations."

Many expect a new head coach to be on the sideline following the end of this season nonetheless.

ESPN's Adrian Wojnarowski and Ramona Shelburne reported last Thursday that New York was expected to bring in player agent Leon Rose as the president of basketball operations. A coaching switch generally accompanies the arrival of a new person in charge of the front office.

Assuming he wants to return, Miller has done enough to warrant at least a position as a lead assistant in the future.