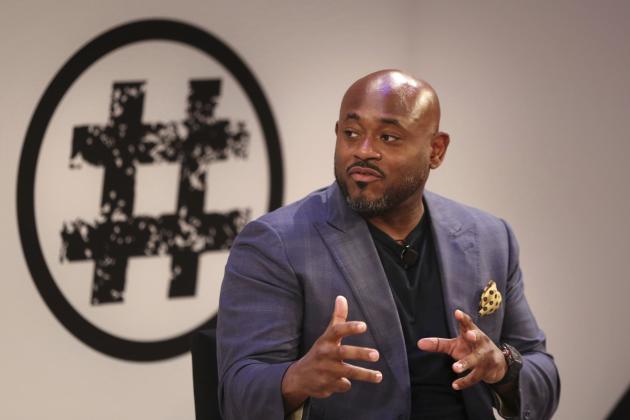 Steve Stoute is a former music executive who helped turn Mary J. Blige and Nas into household names. He apparently has no doubt he can bring a similar level of success to the New York Knicks.

The Knicks' new brand consultant appeared on ESPN's First Take on Tuesday, where he expressed optimism in his vision to turn the franchise around and even compared himself to Drake.

"Toronto Raptors, they brought in Drake to bring that thing. The New York Knicks brought in me," Stoute said.

Stoute, a longtime Knicks fan, also defended owner James Dolan, who has taken the brunt of the criticism for the team's perennial struggles.

"You have a franchise that's synonymous with the sport itself. Of course I want to do that, and I'm going to be a big part of turning it around," Stoute said. "A lot of team have owners that people dislike. It's not about an owner. If you have an aggressive owner, somebody who's willing to invest in the team and put money behind the belief in putting the best product on the court, to me, that's kind of owner I want.

Stoute also alluded to a potential coaching change, per SNY.

"I had nothing to do with Steve Mills' departure," he said. "I want to clean that up. I want to be accountable for getting people more jobs, specifically women and African-American, not necessarily getting rid of folks. But there had to be a change. So there is a change.

"That change will bring a new coach and new coaches that are going to help develop these younger players."

Early Tuesday evening, the Knicks and Stoute issued a joint statement regarding his appearance on First Take and his role—or lack thereof—in basketball operations:

Statements from the New York Knicks and Steve Stoute pic.twitter.com/jDN07qHllO

The Knicks have gotten out of the first round just twice since the turn of the century, with Dolan becoming one of the most oft-criticized figures in sports. He's feuded with former players like Charles Oakley and fans, including banning hecklers who called on him to sell the team. In 2015, Dolan responded to a critical fan letter by calling the 73-year-old man an "alcoholic maybe."

Stoute's exact role as "brand consultant" is not clear. If his role is similar to Drake's in Toronto, he'll have no say in the day-to-day basketball decisions—as the club made clear in its statement.