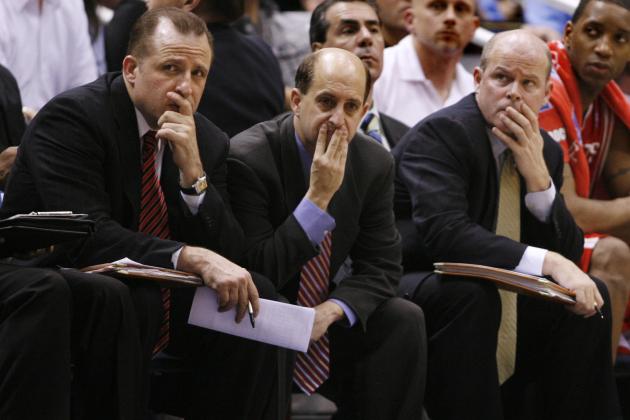 Jeff Van Gundy and Tom Thibodeau are reportedly expected to be among the candidates considered for the New York Knicks' head coaching vacancy.

According to Marc Berman of the New York Post, new team president Leon Rose wants to make a "flashy" hire and has both Van Gundy and Thibodeau on his short list.

The Knicks fired head coach David Fizdale after a 4-18 start this season, and they have played much better under interim head coach Mike Miller with a 13-19 mark.

With Steve Mills out as team president and general manager Scott Perry potentially in line to be fired or demoted, Berman noted the coaching search will primarily be in Rose's hands.

Berman also reported that Rose and Van Gundy have mutual respect, while Rose and Thibodeau have worked together since Rose was the head of Creative Artists Agency's basketball department, and Thibodeau is a CAA client.

Knicks governor James Dolan has reportedly held a grudge with Van Gundy ever since the latter resigned as the Knicks' head coach during the 2001-02 season, but there is no denying the coach's success.

Van Gundy spent seven seasons at the helm in New York, going 248-172. He led the Knicks to the playoffs in each of his first six campaigns and took them to the NBA Finals in 1999, when they fell to the San Antonio Spurs.

He returned to coaching with the Houston Rockets in 2003 and went 182-146 with three playoff appearances in his four seasons in Houston.

In the 18 seasons since Van Gundy left the Knicks, they have reached the playoffs just four times and advanced past the first round only once.

Van Gundy has been an NBA analyst for ESPN since 2007, although he did coach Team USA to a gold medal in the 2017 FIBA AmeriCup and coached Team USA in the 2019 FIBA World Cup qualifiers as well.

Berman reported that the 58-year-old Van Gundy would have interest in the Knicks' head coaching job if offered.

Thibodeau was an assistant under Van Gundy in both New York and Houston before he became a head coach with the Chicago Bulls in 2010. He went 255-139 in five years with the Bulls, leading them to five playoff appearances and one trip to the Eastern Conference Finals.

He was then head coach of the Minnesota Timberwolves for parts of three seasons from 2016 to 2019. Although he went just 97-107, he led Minnesota to the playoffs during the 2017-18 campaign, which ended a 13-year postseason drought.

The 62-year-old Thibodeau is known as a hard-nosed disciplinarian who demands a lot from his players, which may not be such a bad thing for a young Knicks team that is lacking direction.

At 17-37, the Knicks are heading toward their seventh consecutive season without a playoff appearance. They do have a decent collection of young talent, though, led by RJ Barrett, Kevin Knox, Mitchell Robinson and Frank Ntilikina.

If a new head coach with a fresh perspective can find a way to get the most out of them, New York could contend for a playoff spot in the Eastern Conference in the near future given how weak the conference is outside the top six teams.