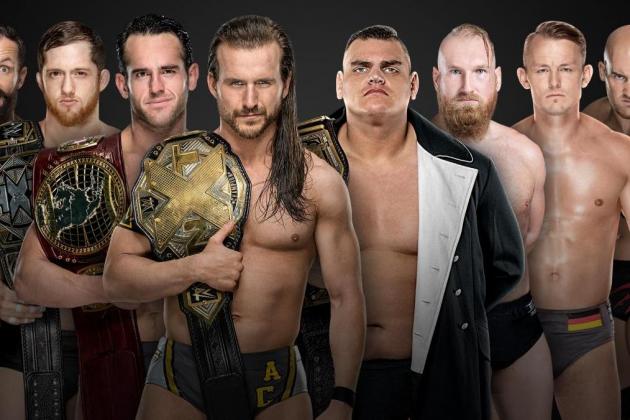 Imperium defeated Undisputed Era in a dream match between two of WWE's top stables at Worlds Collide on Saturday night.

The eight-man tag team match was announced for Worlds Collide well before the two sides ever had a real issue with each other, but their rivalry blossomed at the conclusion of NXT UK TakeOver: Blackpool II.

A well-deserved victory for #Imperium.

After Walter defeated Joe Coffey in the main event to retain the WWE United Kingdom Championship, he posed in the middle of the ring alongside Imperium teammates Alexander Wolfe, Marcel Barthel and Fabian Aichner, but the moment was short-lived.

Adam Cole, Roderick Strong, Kyle O'Reilly and Bobby Fish hit the ring seemingly from out of nowhere and began to decimate Imperium with a dizzying array of high-impact offensive maneuvers.

Cole, the NXT champion, put an exclamation point on the attack by hitting Walter with the Last Shot and leaving him lying in the middle of his own ring.

An enraged Walter cut a fiery promo in German after the sneak attack, and while most weren't too sure what he said, it was clear at that moment that the feud had reached a new level.

The invasion of NXT UK TakeOver: Blackpool II was needed in order to add some heat to the rivalry between the two stables, but even if it hadn't happened, there would have been plenty of interest in seeing two dominant groups lock horns.

It can be argued that Undisputed Era and Imperium are the two most successful stables in all of WWE currently, and they are certainly the top stables on their respective brands.

If the primary goal of Worlds Collide was to give fans matches they have never seen before and possibly thought they would never see, then that was accomplished in the form of Undisputed Era vs. Imperium.

While the stakes of the match weren't high beyond bragging rights, it was a significant contest since it is possible that Undisputed Era and Imperium will never cross paths again.

The spoils went to Imperium by virtue of their win Saturday, although UE likely won't lose much from it considering they are still draped in gold.

We'd like to send you the most entertaining Fantasy articles, videos, and podcasts from around the web.