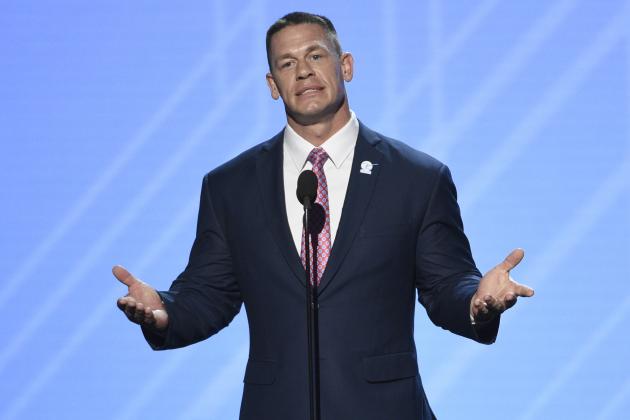 WWE legend John Cena is synonymous with the much-maligned fashion trend of jorts, but it turns out there was a practical reason why he wore them for so many years.

During an appearance on The Late Late Show with James Corden, Cena explained the origins of his unique ring gear:

Cena noted that jorts played into his original character of a street-tough brawler and helped set him apart from his peers, but it wasn't the only reason for his choice.

"I chose denim because you don't blow the crotch out of denim," Cena said. "I tried cargo pants, and in front of the world a few times ... here I am trying to put my life on the line with the Superstars I'm having a match with, and everyone's just looking at my d--k. So denim's a safe play."

Whatever the rationale, jorts did Cena well, as his 16 world title reigns are tied for the most all time with WWE Hall of Famer "Nature Boy" Ric Flair.

The 42-year-old Cena is primarily focused on his burgeoning career in Hollywood these days, but becoming one of the most recognizable figures in WWE history on a level similar to Hulk Hogan, Dwayne "The Rock" Johnson and "Stone Cold" Steve Austin played a significant role in the success he is enjoying now.

It has been months since Cena last showed up on WWE programming, but he suggested in November that he plans to be in attendance for WrestleMania 36 in Tampa, Florida, this April, which means the jorts could be back in action once again.

Cena claimed in the interview with Corden that jorts are making a comeback, and while there may not be many in favor of the 1990s fad returning to the forefront, many wrestling fans would love seeing Cena back in the middle of a WWE ring.