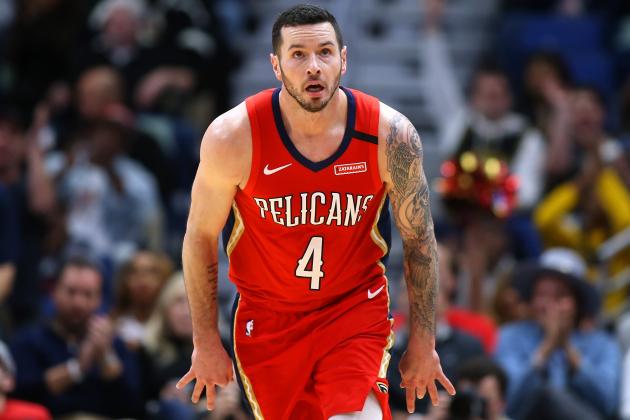 New Orleans Pelicans shooting guard JJ Redick hasn't been shy about offering his takes on social media in the past, and he let another one fly on his eponymous podcast Wednesday (h/t NBA on ESPN):

"I have this personality where I'm all in on something or I'm off of it," he told Lowe. "With social media, I've never felt completely comfortable with it."

"Twitter has now just become a bunch of angry voices," Redick added. "That for me, I had to detach from there."

Redick is in his 14th NBA season. He joined the NBA in 2006, the same year Twitter was founded. Instagram was still four years away, and Snapchat wouldn't be released until 2011.

The differences between then and now are vast, with the younger NBA generation growing up with social media as an omnipresent part of their lives.

Redick spoke with Tom Haberstroh of Bleacher Report about social media and phone usage in September 2018:

"It's not even conscious. I hate to admit it, but anytime you're at a stoplight and your phone is within reach? You pick it up. It's become instinctual. Even if you put the phone down and walk out of the room, you're always aware of where it is. It's become an extension of you. That's f--king scary."

Haberstroh built off those comments when further explaining Redick's stance:

"To be clear, Redick isn't judging his teammates' use of social media and doesn't want to be the locker room grump by any means. He's at a different stage of his life and claims he's played in much more phone-crazed locker rooms before. He looks around the league and sees an NBA that is full of players increasingly locked into their devices. On the bus, on the plane, on the trainer's table, at the locker, at the dinner table—the phone is inescapable.

"In many ways, the league's love of social media is understandable. It offers athletes a sense of control over the messaging, a slice of ownership over their public image. It can open doors and entertain the masses. But how much is too much?"

Redick also told Haberstroh that it's "a problem."

NBA Commissioner Adam Silver seems to feel similarly, based on comments he made at the MIT Sloan Sports Analytics Conference in March 2019. Per Jacob Feldman of Sports Illustrated, Silver said he believes social media is partially related to some players being "truly unhappy."

On the court, Redick's team is about to dominate NBA social media with heralded rookie Zion Williamson's expected debut on Jan. 22 against the San Antonio Spurs, per ESPN's Andrew Lopez.

Until then, the Pels have three games lined up, starting with the Utah Jazz on Thursday.

Follow New Orleans Pelicans from B/R on Facebook and get the latest updates straight to your newsfeed!

We'd like to send you the most entertaining New Orleans Pelicans articles, videos, and podcasts from around the web.