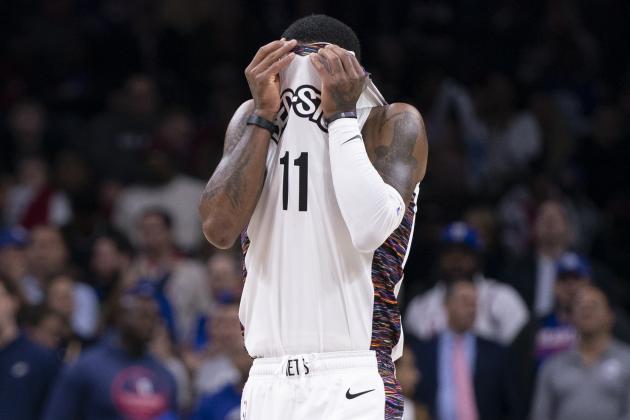 Kyrie Irving said the Brooklyn Nets have "glaring" roster needs that will need to be addressed in the offseason if they are to compete against the top teams in the NBA after Brooklyn's 117-106 loss against the Joel Embiid-less Philadelphia 76ers on Wednesday night.

Kyrie Irving was asked after tonight’s loss to Philly about this game against a top East opponent showing how much work the Nets still have to do in order to compete at the highest level while waiting for Kevin Durant to return. Here’s Irving’s answer: pic.twitter.com/NAqA4OvQk2

The Nets have been without Kevin Durant this season as he continues to rehabilitate from a torn Achilles, and they might need to add another piece or two in the offseason to compete for a title in 2020-21 and beyond. But Irving's performance Wednesday—he shot 6-of-21 from the field, finishing with 14 points and a team-worst minus-29 in 37 minutes—didn't help Brooklyn's cause.

J-Rich from behind on Kyrie 🚫 pic.twitter.com/y43lw8Mb5f

Matisse Thybulle comes up with a block on Kyrie Irving and finishes with a triple on the other end. pic.twitter.com/lDJ8MrTglO

Of note, Irving said, "Collectively, I feel like we have great pieces, but it's pretty glaring we need one or two more pieces that will complement myself, [Durant], [DeAndre Jordan], [Garrett Temple], [Spencer Dinwiddie], [Caris LeVert], and we'll see how that evolves."

Conspicuously absent from that list of players was talented young big man Jarrett Allen and sharpshooter Joe Harris, both of whom are regular starters. That may not mean that Irving doesn't seem them as long-term pieces worth keeping and building around. He may have been saying names off the top of his head and missed two of his key teammates.

But Allen and Harris are arguably more valuable than veterans like Jordan or Temple. Allen, 21, is 10 years younger than Jordan but is already outproducing him:

The 28-year-old Harris, meanwhile, has outplayed the older Temple (33) as well:

It's interesting that Irving would omit two starting players when mentioning pieces worth building around in favor of veterans who are past their prime and currently coming off the bench. And the timing of the comments, with the Nets mired in a 2-9 stretch since Dec. 26, may rub some folks the wrong way.

The Nets are still the eighth seed in the Eastern Conference with an 18-22 record. They hold a comfortable four-game lead over the ninth team in the standings, the Chicago Bulls. So it's perhaps a bit early to be contemplating any offseason moves or publicly ruminating on the need for them.