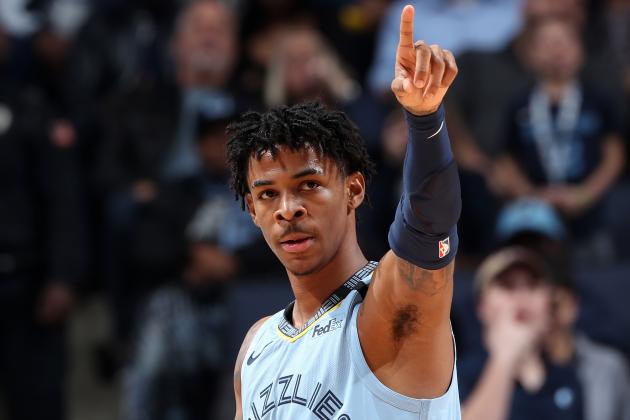 Ja Morant has already validated the Memphis Grizzlies' decision to select him second overall in the 2019 NBA draft just 35 games into his career.

The 20-year-old point guard has also reportedly made an anonymous NBA general manager question why Zion Williamson was drafted first overall by the New Orleans Pelicans instead of Morant.

"I wouldn't have taken [Williamson] No. 1 even back then," a Western Conference general manager told Yahoo Sports' Vincent Goodwill ahead of Williamson's Jan. 22 regular-season debut. "I would've taken Ja or traded back to pick up as many picks as I could."

Williamson has been out since undergoing arthroscopic knee surgery to repair a torn right lateral meniscus on Oct. 21.

I asked Ja Morant’s dad where he should go in the NBA Draft after this performance:

“Is there anything before one?” pic.twitter.com/4IB0qELWcB

Morant went on to post a triple-double in Murray State's 83-64 win over Marquette in their opening-round matchup, becoming the first player to do so since 2012.

Morant has translated that success to the pro level so far by averaging 18.0 points, 6.9 assists, 3.5 rebounds and 1.0 steals across 35 games (all starts) for the 19-22 Grizzlies this season. He is Memphis' lead distributor and is tied with second-year forward Jaren Jackson Jr. as the team's leading scorers.

Morant and Jackson combined for a play Tuesday night that showed exactly what the Grizzlies had hoped for when drafting Morant to pair with the 2018 fourth overall pick:

NBA Hall of Famer Tracy McGrady foresees Morant to be "a MVP in this league" regardless of where he was picked:

However, while Morant and Williamson could be tied together by comparisons throughout their NBA careers, it's entirely too early for anything definitive until Williamson is able to play. If they want to contend for a playoff spot this season, the 15-26 Pelicans need Williamson to produce as he did for Duke as the AP, Naismith and Wooden Player of the Year.

We'd like to send you the most entertaining Memphis Grizzlies articles, videos, and podcasts from around the web.