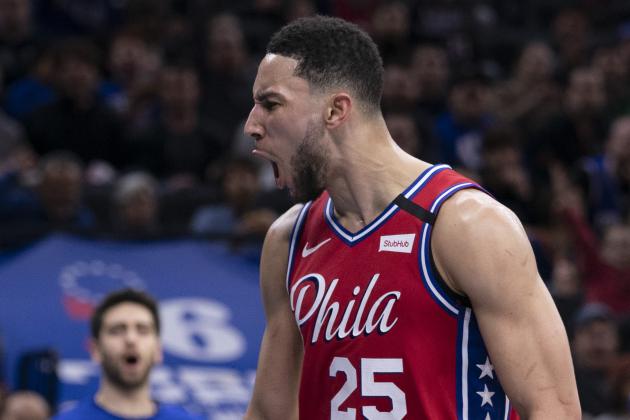 When Ben Simmons is good, we fault him for not being perfect.

The Philadelphia 76ers' 117-106 win over the visiting Brooklyn Nets on Wednesday offered yet another example of a uniquely gifted, conspicuously flawed star performing well while still failing to offer total satisfaction.

Maybe someone, somewhere, has no nits to pick about Simmons' game. But let's not ignore the fact that the vast majority of the Simmons discourse—for years—has focused more on what he can't do than what he can.

While posting 20 points on 9-of-13 shooting, 11 assists, six rebounds, a block and a steal Wednesday, Simmons demonstrated that he often fills the "can" category to capacity.

With Joel Embiid missing his fourth straight game following surgery to repair a torn ligament in his ring finger, the Sixers operated in space, and Simmons showed early how he could exploit the wider lanes and spread-thin Nets help defenders attending to Philly's shooters.

He exploited mismatches to draw in help, leading to clean looks from deep for a Sixers team that can never get enough of them:

Ben Simmons in the first half has been pretty, pretty good lately.

Won’t show up in the box score but that last possession was great: Simmons saw that he had Kyrie on him, cleared out the side of the floor for himself, Nets double and ball goes around the horn for a Korkmaz 3.

He got downhill in the half court and punished help defenders:

He utilized his brute strength to overwhelm the Nets in transition:

He probed the lane with the two-steps-ahead intention of finding shooters, yielding a pair of critical late-game buckets:

In the four games Embiid has missed following surgery, the Sixers haven't exactly dominated. They're 2-2, and both defeats came on the road, extending their losing streak to six straight away from home. Of course, they've also beaten the Boston Celtics and Nets, and Simmons has averaged 18.5 points on 58.9 percent shooting, 8.5 rebounds and 7.0 assists, all while playing a brand of versatile and intimidating multiposition defense that you could get from maybe a half-dozen other players in the league.

And yet, admit it: Watching the game, you noticed Simmons' refusal to shoot a three despite the Nets routinely guarding him with centers who didn't even look at him beyond the arc. You're also probably a little annoyed that he avoided contact too often, and that he shot only 2-of-7 from the foul line.

If you're into studies in contrast, it irked you that Kyrie Irving's evasive, purposeful forays into open space made Simmons' ponderous entries into those same locales seem so nonthreatening. The Sixers rang the alarm when Irving penetrated. Meanwhile, the Nets knew Simmons was essentially harmless outside the restricted area.

Oh, and Simmons didn't record a field-goal attempt in the fourth quarter. He logged five assists, but it was Tobias Harris who took the Sixers home with 11 fourth-quarter points (and 24 of his game-high 34 in the second half).

Maybe this inclination to focus on the negative is the result of laziness. It's a lot easier to harp on the one or two things Simmons does poorly than it is to catalog the long list of what he does well.

Maybe it's the specific nature of his shortcomings. Cowardice is too strong a word, but Simmons' career-long reluctance to draw contact and shoot from the perimeter sometimes gives the impression of unwillingness rather than inability. When he bullies a smaller player, like he did to Spencer Dinwiddie on a decisive post-up for the Sixers' first points of the game, the immediate reaction is some variation of "Why doesn't he do that every time?"

It's as if we've decided we have a better idea of what Simmons can do than he does. We want him to stretch his game, which is strange because it's generally a compliment to say a player "plays within himself."

Thought exercise: What if Simmons was submarining the Sixers' offense by attempting 10 threes a game, converting them at, optimistically, a 25 percent clip? Nobody would be happy about that, save for every Philadelphia opponent. Yet it often feels like that's what we want from him—to power through deficiencies at any cost.

Everyone's trying to pull something out of Simmons' game that just isn't there. It's fair to expect young players to improve, but it's irrational to dictate how they're supposed to get better. Simmons suffers this treatment partly because he was a No. 1 overall pick and partly because he's shown the ability to do almost everything else. The max extension he signed this offseason didn't help, either.

The power forward frame, the point guard skills, the speed, the strength, the vision—all of it makes Simmons seem limitless. With a setup like that, it's no wonder why we fixate on limitations.

Even his head coach has struggled to balance the obvious (Simmons can't shoot) with the fanciful (but what if he could?).

None of this sympathetic talk erases the challenges of building a team around such an uncommon player, and it may not save the Sixers from eventually having to shuffle the roster again.

But as he tries to keep the Sixers afloat without Embiid, maybe we should let Simmons decide what he can and can't do. Wednesday's win showed he has a pretty good idea of how to play to his strengths.