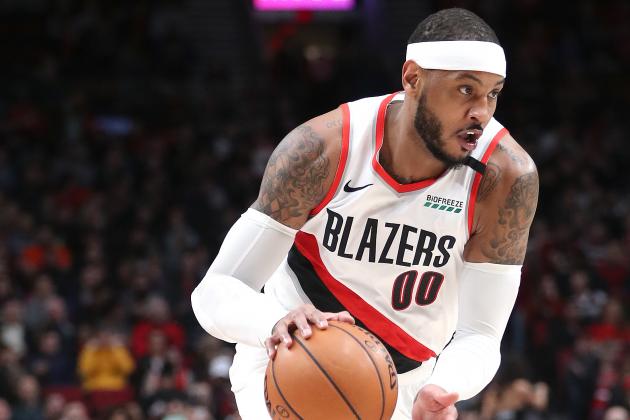 Carmelo Anthony said he doesn't harbor any ill will toward the Houston Rockets ahead of the team's showdown with the Portland Trail Blazers on Wednesday night.

"I honestly don't have any feelings about going back," he said Monday, per Jonathan Feigen of the Houston Chronicle. "I was only there a couple weeks. I don't really have any type of feelings going back."

The 35-year-old spent all of 10 games with the Rockets in the 2018-19 season, averaging 13.4 points and 5.4 rebounds while shooting 40.5 percent from the field and just 32.8 percent from three. He was an imperfect fit, and he and the Rockets indicated they planned to waive him before he was eventually traded to the Chicago Bulls.

"My pride was hit," Anthony said of the situation. "My ego was hit. I had to really get past that."

He has gotten past it in Portland, where he's averaged 16.3 points and 6.1 rebounds per game while shooting 43.4 percent from the field and 39.4 percent from three. He has averaged 31.8 minutes while starting all 26 games for the Blazers after starting only two of 10 games for Houston and playing a career-low 29.4 minutes per game.

That hasn't exactly translated to wins—the injury-depleted Blazers are 11-15 with Anthony in the lineup and 6-9 without him.

It's been a disappointing year for the Blazers, although at 17-24 the team is still just two games behind the Memphis Grizzlies (19-22) for the eighth and final seed in the Western Conference playoffs.

Anthony has been a big factor in the team treading water, and his resurgence after washing out in seasons prior with the Oklahoma City Thunder and Rockets has been one of the better storylines of the 2019-20 campaign.