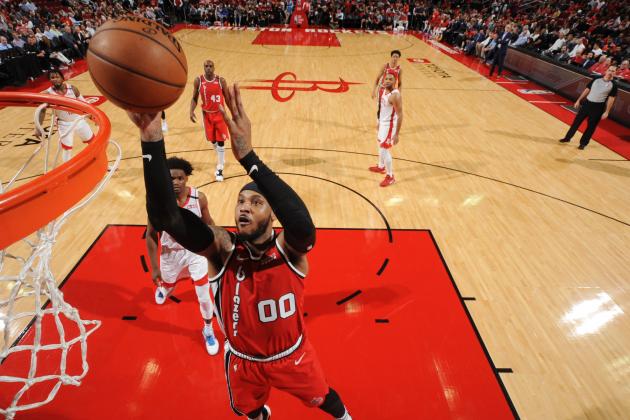 Damian Lillard scored a team-high 25 points and Carmelo Anthony added an 18-point, 12-rebound double-double in his return to Houston as the Portland Trail Blazers upset the host Rockets 117-107 on Wednesday at Toyota Center.

The second quarter proved to be the difference, as the Blazers outscored the Rockets 32-21 behind eight of Anthony's 18 points.

Portland took a 60-47 halftime edge and led 102-88 in the fourth quarter after a CJ McCollum and-1, but the Rockets responded with a 12-3 run capped by a Ben McLemore three-pointer with 5:03 left.

However, the Blazers went on a 10-2 run kick-started by back-to-back threes from McCollum and Anthony to effectively seal the win.

The game marked Blazers forward Anthony's first matchup in Houston since a 10-game stint with the Rockets in the beginning of the 2018-19 season. The team parted ways with Anthony midseason.

The 18-24 Blazers won their second straight game. The Rockets have lost three of their last four.

Anthony Shines in Return To Houston

There was no moving tribute video for Anthony upon his return to Houston, where he spent all of 10 games last year before the team decided to move on. He had averaged 13.4 points on 40.5 percent shooting for a Rockets team that never seemed like a good match.

Oddly enough, Anthony couldn't find a spot on another team for the remainder of the season and into the 2019-20 campaign until he signed with a Blazers team ravaged by frontcourt injuries.

Portland's acquisition has certainly turned out to be a good one, though, with Anthony posting 16.3 points and 6.1 rebounds per game for a Blazers team fighting for a playoff spot.

The 35-year-old isn't about to lead his troops in scoring every night like he used to with the Denver Nuggets and New York Knicks, but games like Wednesday's win over the Rockets showcase his enduring effectiveness.

The patented Anthony mid-range jumper after backing down an opponent near the paint doesn't look like it's going anywhere any time soon:

We will never get tired of watching this. @CarmeloAnthony | #RipCity pic.twitter.com/vSf4i2Z7Yf

Anthony has turned into an excellent tertiary scoring option behind Lillard and McCollum, to the point that he delivered a clutch go-ahead 17-footer to lead the Blazers to a 101-99 win over the Toronto Raptors on Jan. 8.

But he can also extend out beyond the arc for clutch threes, like this one to put the Blazers up 111-100 late in the fourth Wednesday night:

Anthony is shooting 39.4 percent from beyond the arc, which is his best mark since 2013-14. He's also been a contributor on the boards and was especially clutch Wednesday in grabbing 12, which helped Portland earn a 58-50 board differential over Houston.

Everything is going quite well for Anthony in Portland, and he has no ill will toward his last stop.

"I honestly don't have any feelings about going back," he said, per Jonathan Feigen of the Houston Chronicle. "I was only there a couple weeks. I don't really have any type of feelings going back."

Still, Anthony proved once again that he definitely has something left in the tank during his 17th NBA campaign. He's now playing a key role on a team just 1.5 games out of a playoff spot with half the season remaining.

The Rockets will host the Los Angeles Lakers on Saturday at 8:30 p.m. ABC will carry the nationally televised broadcast.

The Blazers will visit the Dallas Mavericks on Friday at 9:30 p.m. ESPN will televise the game.