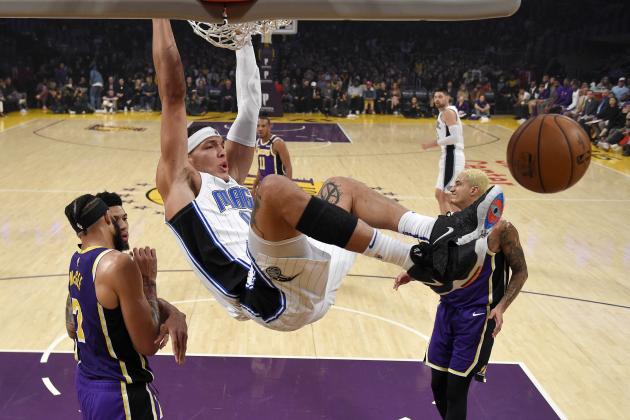 The Orlando Magic snapped the Los Angeles Lakers' nine-game winning streak by upsetting them 119-118 at Staples Center on Wednesday night.

The victory should have been a lot easier. The Magic led by as many as 21 points before the Lakers erased a 20-point deficit in eight minutes to take a 94-93 lead with just over 10 minutes remaining in the final quarter. From there, it was a back-and-forth affair down the stretch.

Markelle Fultz's two-point bucket gave the Magic some breathing room, up 116-112 with 38.6 seconds left, but LeBron James sunk a three-pointer to pull the Lakers within one. Fultz again came up big to extend Orlando's lead to 118-115 at the 15.4-second mark.

LeBron’s potential game-tying 3 rimmed out, and LAL’s 9-game winning streak will be snapped by the shorthanded Magic. LAL fought back from a 21-point deficit to take a 4th Q lead before falling in crunch time.

Aaron Gordon's made free throw with 1.7 seconds left kept the game from going to overtime, as Quinn Cook nailed a three-pointer as time was expiring.

The 33-8 Western Conference-leading Lakers were without All-Star forward Anthony Davis, who missed his fourth game in a row with a bruised gluteus maximus suffered due to a hard fall during the team's 117-87 victory over the New York Knicks on Jan. 7. Veteran point guard Rajon Rondo (finger) was also out.

Reserve guard Alex Caruso took an elbow to his mouth in the early going and was evaluated for a concussion, per team reporter Mike Trudell, which had inconclusive results and kept him out for the remainder of the game.

Magic Lean on Fultz and Iwundu Amid Injury Woes

Fultz and Iwundu were crucial pieces to the Magic's upset victory despite Gordon treating the game like a dunk contest:

Aaron Gordon really did that. pic.twitter.com/tA6i3r2qmA

Fultz recorded a career-high 11 rebounds and performed as he was expected to when the Philadelphia 76ers picked him No. 1 overall in 2017 before thoracic outlet syndrome in his shoulder derailed his development:

Markelle Fultz left it all on the floor tonight ✊

Markelle Fultz had a HUGE night

After his 10th assist of the game, Markelle Fultz has scored baskets on Orlando's last two possessions, giving Orlando a 118-115 lead over L.A. with 15.4 seconds to go. Fultz fell to the court with an apparent cramp in his calf.

Markelle Fultz going anywhere he wants in this fourth quarter …

"I think 30 games from now, he'll be at another level," head coach Steve Clifford told Marc Stein of the New York Times on Nov. 12. "He just hasn't played a lot of basketball in a couple years."

The Magic have now played 31 games since Clifford said that, and the guard is proving him right.

Fultz was accompanied by a career-high 19 points from Iwundu, including nine points and two boards in the opening quarter.

Somehow, Orlando managed to have such a well-rounded outing that All-Star center Vucevic was an afterthought. That is the best-case scenario for the banged-up Magic, especially against the juggernaut Lakers.

Caruso's absence certainly didn't help matters for the Lakers, as James pointed out his importance to the team earlier this week:

Lakers’ LeBron James on Alex Caruso: “Every time he’s in the game, he’s a plus guy. He can do so much. He can defend at a high level. He’s very smart. He’s very tough. To have him on this ball club is a luxury.” pic.twitter.com/IKmeIG2HDq

However, James is the only one whose value compares to Davis'.

L.A. was able to win three straight without the 2012 No. 1 pick, but Davis-less success isn't sustainable. The Lakers got a taste of that against the Magic, who were at the very least equally hampered.

This loss could be chalked up as an anomaly in some ways, though.

The Lakers were still able to climb out of a 21-point hole with significant production from the bench:

Frank Vogel said he was proud of the bench effort, but ultimately, “We didn’t play well enough to win a basketball game tonight.” He gave credit to Orlando, without a bunch of their regulars, likening their effort to LAL’s in OKC over the weekend.

Earlier Wednesday, Vogel spoke about how the Lakers are different without Davis.

"We obviously change very much [without Davis]," he said, per Tania Ganguli of the Los Angeles Times. "Dramatically. And it's really been a great time for [forward Kyle Kuzma] to climb the rope. He struggled to catch a rhythm in this system early in the year battling the injuries and having a new role than he had last year."

Kuzma didn't have a great time against the Magic, as he was all but invisible as a scorer with four points on 2-of-10 shooting. The 24-year-old has been starting for Davis and led all Lakers with 36 points in a 125-110 win over Oklahoma City on Jan. 11.

Kuzma can't consistently replace what Davis brings to the court, though. Nor can any other Laker.

The Lakers need Davis back alongside James as the rest of January will round out against much tougher competition such as the 26-14 Houston Rockets, 27-12 Boston Celtics, 26-16 Philadelphia 76ers and 28-13 Los Angeles Clippers.

The Magic will stay in Los Angeles to play the Clippers on Thursday.

The Lakers will begin a five-game road trip in Houston on Saturday.