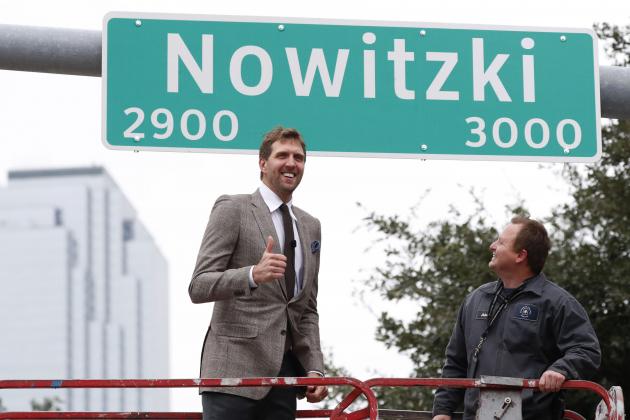 It's inevitable that Dirk Nowitzki will have his No. 41 jersey retired in Dallas, and the ceremony is expected to happen at some point in 2020.

"Dirk and I are discussing it," Mavericks owner Mark Cuban told Dwain Price of the team's website on  Tuesday. "We're trying to figure it out."

It's even possible that the Mavericks could retire his jersey at some point this season.

"The challenge is just getting it all done just because it's not a lot of home games left. It's only like (19) home games left, so that's the hard part," Cuban said. "So we're discussing it now whether it'll be now or one of the first couple of games next year."

Nowitzki, 41, is the most revered player in franchise history after leading the Mavs to their lone NBA title in 2011 over LeBron James, Dwyane Wade and the Miami Heat. He was a 14-time All-Star, four-time All-NBA first-team selection and the 2006-07 NBA MVP. He currently sits sixth all-time in points scored (31,560).

He also helped usher in the modern style of play, serving as an early prototype for the stretch-4 that is so predominant in the NBA today. Not many big men could stretch the floor as proficiently as Nowitzki, a career 38 percent shooter from three.

Add it all up, and it's pretty obvious why the Mavericks plan to not only retire his jersey but also construct a statue of Nowitzki in the future.

"We're also talking about hopefully being able to unveil a model for the statue at the beginning of next year as well," Cuban said. "So hopefully we can put the two together. Nothing is etched in stone yet, but we're looking at it."

We'd like to send you the most entertaining Dallas Mavericks articles, videos, and podcasts from around the web.