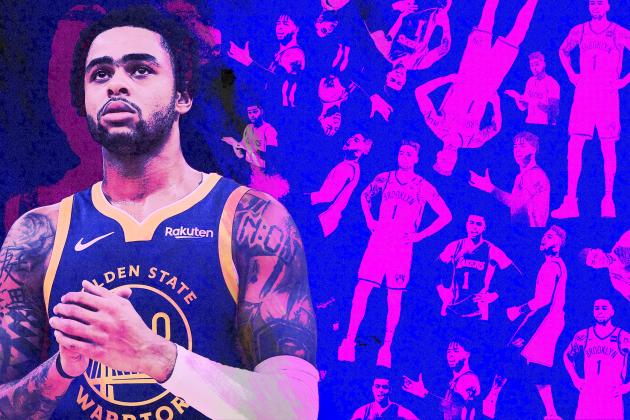 Last season, Nets team bus rides operated like NBA-business seminars. Professor Jared Dudley, the 12-year vet, would hold court, lecturing a young roster about everything from 401K plans to the impending free-agency market. When guard Spencer Dinwiddie was weighing a three-year, $34 million extension, the team talked through it together. (He accepted, against Dudley's advice.) "We were so open," Dudley says.

Often, the young player who sat right in front of Dudley would turn around and ask questions of his own. D'Angelo Russell was in the midst of a breakthrough season—and a free-agent one at that. He had the future on his mind.

If it were up to Russell, he would re-sign with Brooklyn on a nice, long deal. But it wasn't, not really, not when the Nets were showing interest in replacing him with Kyrie Irving, plus Kevin Durant.

And so Russell would ask Dudley about his options: "If Kyrie and KD come, how can this and that happen? What if I want to go there? Explain to me a sign-and-trade." Dudley, a mentor to many, was impressed. "Out of every young player I've been associated with," he says, "he asked the most questions."

At season's end, Russell entered an odd free-agency limbo. His fate was tied to Irving's, and he understood the Nets' priorities. "I know if you have the opportunity to sign KD and Kyrie, as a GM, you gotta gamble with that," he says. "You got to."

When Durant announced his decision, Russell's agent called, informing him the Warriors were ready to offer a max contract (four years, $117 million) via sign-and-trade. Russell had braced for the moment, and jumped at the opportunity. "I'm like, 'Why the fuck is you on the phone with me?!'" he says. "'Tell them yes!'"

Russell figured he was waltzing into a dynasty. Instead, the best team of last decade begins this one at the bottom of the Western Conference. On many nights, Russell goes it alone, with Klay Thompson (torn ACL) and Steph Curry (broken hand) sidelined and Draymond Green (various maladies) missing games as well. With Golden State some 20 games below .500—and questions about his fit alongside Curry and Thompson—Russell's name has been a popular one in trade fantasies.

Those rumors have swirled since the night Russell's deal with Golden State went public. They are unrelenting. Some have him going to Minnesota to partner with his friend Karl-Anthony Towns. Others say Philadelphia for Ben Simmons, or anywhere, really—just pick a name out of the hat: 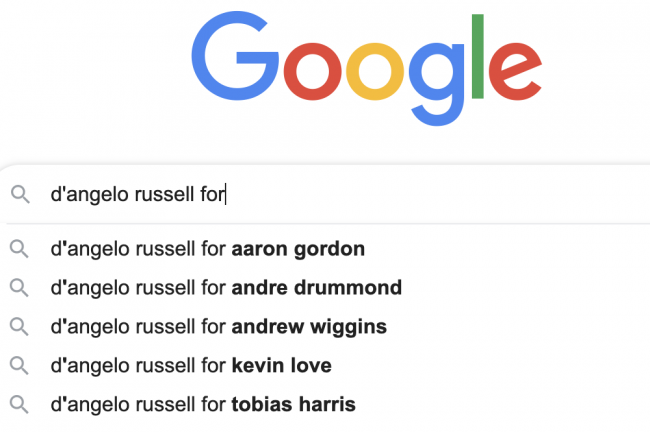 Still, Russell is intent on making his time with the Warriors—no matter the duration—worthwhile. He has spent his first months with Golden State probing the Hall of Fame-caliber players and thinkers that surround him. He's learning about shot selection from Curry; defensive rotations and intensity from Green; the art of simplicity from coach Steve Kerr. "I think that's a beautiful luxury to have," Russell says.

Golden State may not offer a chance to win a title this year, but there's no better place for Russell to continue his NBA education. "Whether it's me being here for a year or four years," he says, "I knew I'd learn what I needed to learn in that time, and I wasn't going to let that time be wasted."

So far, it's been a smooth transition back to California, where Russell spent his first two seasons (albeit a few hours south in Los Angeles). For one, he has escaped Northeast winters; he recently mentioned to the Star Tribune's Chris Hine, half-kidding, that the local weather played a "major part" in his free-agency move. There are other perks, too—namely a home on a quiet suburban road and a yard for his dogs, two Bernedoodles and a Boston terrier, the last of whom is running in frantic circles a few feet away. "The more dogs D'Angelo has, the happier he is," his older brother Antonio says.

That's why Russell is visiting the local pet adoption center, the SF SPCA, just before Christmas. In a few minutes, he'll gift puppies to two local families in need, and as he waits for the big reveal, he occasionally enters the puppy pen to converse and roll around with a miniature mutt whose paws are white with black spots and who will soon be named Oreo by Russell and four very happy, slightly overwhelmed children. A project like this has been a long time coming for Russell. Even as a sporty kid, he was an animal lover and dreamed of becoming a veterinarian.

"I've never met anyone who as a child wanted to be a veterinarian," Antonio says, still amused by the memory. "For him to say something like that, it was so different." Growing up, Russell liked to challenge himself intellectually. In high school, when most kids fulfilled their language credits by half-heartedly studying Spanish or French, Russell opted for Mandarin. (He still remembers some, which has come in handy lately. In November, he inked a sponsorship deal with Li-Ning, the China-based sportswear brand, succeeding Dwyane Wade as its top active star.)

Now 23, Russell is still searching for ways to expand his mind. This past Christmas, he requested one gift in particular from Antonio: books. Most of the reading material focused on personal development: Grit by Angela Duckworth, a San Francisco-based writer; The Alchemist; Jay-Z's Made in America.

"One of his biggest strengths is not being afraid to learn, to ask those questions," Antonio says. "He's unafraid to be curious."

He is also unafraid to answer questions, and to open up. "I'm addicted to showing people what they don't get to see, as far as the everyday lifestyle of an NBA player," he says.

It's possible that such a desire stems from the early part of Russell's career, when the public perception of him did not align with how he saw himself. He was labeled immature time and again, largely because of his infamous 2016 Snapchat gaffe. After the incident, many attacked Russell's character, including Bill Plaschke of the Los Angeles Times, who wrote, "The kid doesn't think," and, "You can't pass Russell the torch, because he will set something on fire, which is pretty much what happened with this video that recently appeared on a celebrity gossip site." 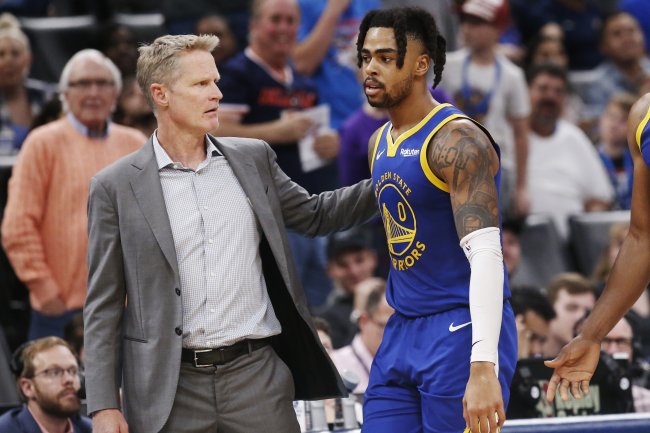 Sue Ogrocki/Associated Press
With a roster ravaged by injuries around him and his future with Golden State already a matter of conjecture, D'Angelo Russell has tried to soak up whatever teachings he can from Steve Kerr and the Warriors' sidelined stars.

The pile-on continued into 2017, when Magic Johnson questioned Russell's leadership after trading him to Brooklyn. "My narrative was created by the outsiders versus me," Russell says now.

Last year, when Russell and I spoke in Brooklyn during his first All-Star season, he still felt jaded about the business of the league, the way it's covered, produced and packaged. In Brooklyn, with free agency looming, his future remained uncertain despite his breakthrough. Indeed, through his first four seasons, Russell had seen an ugly version of the league, from a 65-loss season to over-the-top personal criticism.

I asked about his Twitter header at the time, which was a graphic cartoon commentary on media talking heads and gullible audiences. "There's so much meaning behind it," he said. "I've been through the blender."

He still carries some of that skepticism today; when asked whether he ever watches sports talk TV, he says, "No. There's always two people up there, and you notice one person is debating what's right and one is debating what's wrong."

That may never change, but Russell has. If in the past he was shaped or affected by outside noise, that seems no longer to be the case. Amid an odd, disappointing, chaotic season, Russell has exuded an admirable serenity. And though this year feels passing, random and even irrelevant in the grand scheme of the Warriors, Russell has found a sense of presence, of being where his feet are, as he likes to say. He has done this not by settling in at long last, or by trusting that San Francisco will be his forever home, but by embracing the very opposite: the fact that he may never settle at all, that his worst instincts about the league's cutthroat priorities are probably correct, but that it doesn't have to matter, doesn't have to bother him. Russell seems comfortable and secure within himself, and the odd bit of "barbershop talk," as he calls it, won't shake that.

Recently, he swapped out his old Twitter header for a more idyllic one: his own feet kicked up, overlooking a beach in Miami. Russell is mostly a minimalist on social media, so it's easy to read the switch as a message about his career—chiefly, that he plans to enjoy it.

The Golden State dynasty may be on pause, but Russell's breakout rolls on. He is stacking one career best on top of another, averaging highs in points, threes and free throws per game. In the age of the guard as full-bore gunner, Russell's game is about control: a distinctly soft touch, patience and awareness in mid-range space, a knack for finding any runner near the rim. He is a modern NBA nightmare.

The Warriors offense has been reinvented around him, though that's mostly out of desperation. Without Curry, Thompson or Durant, it hardly resembles the free-range juggernaut of years past, leaning more often on the pick-and-roll to wedge just a fraction of the space that used to come so easily. According to Synergy Sports, Russell has run some 42 percent of his possessions in the pick-and-roll, double Curry's rate from last year.

In other ways, Russell has tried to acclimate himself to what remains of Kerr's system. For instance, he's already attempted more shots running off back screens (53) than he did all of last year (51), per Synergy, and he's shooting them well.

"This whole year is kind of a test of seeing what's gonna fit, what's gonna make sense for next year," Russell says. "It's them kind of sitting back, seeing who I am as a teammate and a player, what I bring to the table."

So far, Russell's fellow Warriors have appreciated not just his go-to scoring, but his attitude as well. "He's positive, he's encouraging, just trying to bring everyone along with him," forward Marquese Chriss says. "We're not going through the best time right now, so it's good to have someone who is consistently happy and brings good energy."

"He's goofy," echoes center Willie Cauley-Stein. "He plays around a lot, but he's a professional. He sees the game different, so he's gonna let you know if he sees something that you might not see. He's a leader, man."

And he is here—for now.

Russell's desire is to remain in Golden State. During his trip to the postseason last year, he found an "addicting" level of intensity and focus, and he longs to feel it again. He grows giddy when considering the chance to compete alongside Curry, Thompson and Green—and perhaps a top draft pick. "I think it's gonna be crazy," Russell says of the team at full strength. "I don't think the world knows what we're capable of."

Of course, it's possible we'll never find out. That notion might spoil the journey for some—but not Russell, not after all he's seen and learned. No matter what comes next, he says, "I get to bottle all of this and take it with me. That's the beauty of the league."