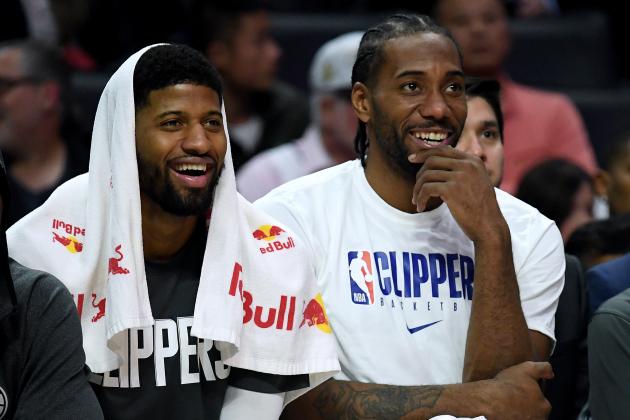 Paul George provided a peek behind the curtain to explain the series of events that led him to join Kawhi Leonard and the Los Angeles Clippers.

George told ESPN's Ramona Shelburne he initially called Leonard to congratulate him on his NBA Finals win with the Toronto Raptors and that their relationship "just trickled from there." Shelburne provided more details:

"There were countless text messages and phone calls and then two in-person meetings at Drake's house in Hidden Hills, California. (Drake had befriended Leonard during his season in Toronto and let Leonard — who lives in San Diego — stay there when he was in Los Angeles for free-agent meetings.) By July 1, they had decided to put their plan in motion: Leonard told the Clippers that he was interested in playing for them but only if they could improve their roster by adding an All-Star-caliber player like George."

George and Leonard met July 2 in Los Angeles, and then George's agent reached out to Oklahoma City Thunder GM Sam Presti to discuss a possible trade to the Clippers.

According to Shelburne, Presti was "stunned" and met with George to personally address the situation. The Thunder subsequently acquiesced to George's request and eventually worked out a deal with Los Angeles, with the trade having "nearly collapsed under its own weight" at various points during the negotiations.

George explained to Shelburne how his decision to leave Oklahoma City wasn't solely down to Leonard. The Palmdale, California, native, who also attended Fresno State, was looking to play closer to home.

The Clippers trumpeted that narrative once their acquisition of George was official.

The 29-year-old is already putting in work to build a legacy beyond the court in Southern California. On Dec. 29, the city of Palmdale officially unveiled three basketball courts he helped renovate at a public park.

George's trade to the Clippers still represented a pretty abrupt about-face from the six-time All-Star.

With many expecting him to at least explore the free-agent market, he signed a four-year, $136.9 million extension with the Thunder during the 2018 offseason. He acknowledged he had wanted a move to the Los Angeles Lakers a year prior after he requested a trade from the Indiana Pacers. However, he was happy to return to Oklahoma City.

His trade to the Clippers caught everybody off guard, but Presti made the most of things. The Thunder got five first-round picks, Danilo Gallinari and Shai Gilgeous-Alexander.

Gilgeous-Alexander has taken a step forward in his second year and looks like the team's point guard of the future. He's fresh off a 20-20-10 performance in a 117-104 win over the Minnesota Timberwolves on Monday.

George's departure provided Presti with some cover to explore offloading Russell Westbrook as well. Oklahoma City added to its treasure chest of draft picks when it sent Westbrook to the Houston Rockets.

Chris Paul is helping the team stay competitive in the present too, with OKC currently sitting seventh in the Western Conference.

Follow Los Angeles Clippers from B/R on Facebook and get the latest updates straight to your newsfeed!

We'd like to send you the most entertaining Los Angeles Clippers articles, videos, and podcasts from around the web.