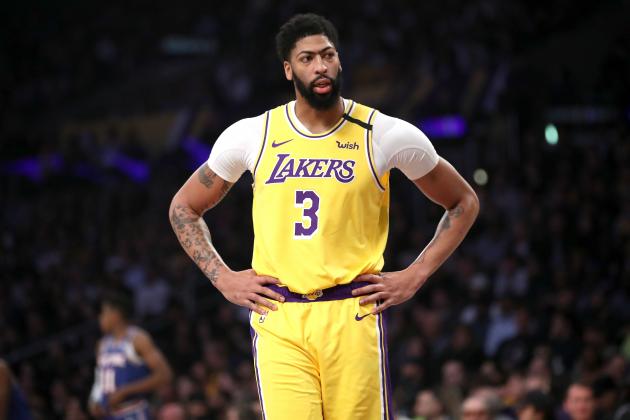 As he continues to recover from a bruised tailbone, Los Angeles Lakers star Anthony Davis doesn't intend to adapt his style to avoid physicality in the paint.

"It doesn't bother me," Davis said, per USA Today's Mark Medina. "Whether they try to be physical or whatever, I'll still try to find a way to impact the game."

The six-time All-Star added he's trying to learn from LeBron James, who has been remarkably durable throughout his career despite absorbing a lot of contact on an almost nightly basis.

"He's been healthy," Davis said. "So I'm just picking up on those little things. Knowing I've been hit with the injury bug a lot in my career, I'm trying to figure out how can I stay on the floor. The more you're on the floor, the more you can help your team."

Davis' tailbone injury was the result of a fluke accident. He went up to contest a shot by New York Knicks forward Julius Randle and landed hard on his back.

The 26-year-old has struggled in past seasons to stay on the court, though. The injuries have often been minor, such as the fractured left index finger he had in 2018-19, but have piled up over time. He has averaged over 10 missed games per season since he entered the NBA in 2012-13.

Forcing him to change his approach is unnecessary because he's already attempting a career-high 3.7 three-pointers per game. According to Basketball Reference, his average field-goal distance (11.1 feet) is on pace to be his biggest ever.

Davis is naturally migrating his game away from the paint to fit with the NBA's floor-spacing trends, with James' presence making the transition even easier.

Using a defined load-management plan might be a good idea, however, to help Davis recover from the general wear and tear a player experiences.