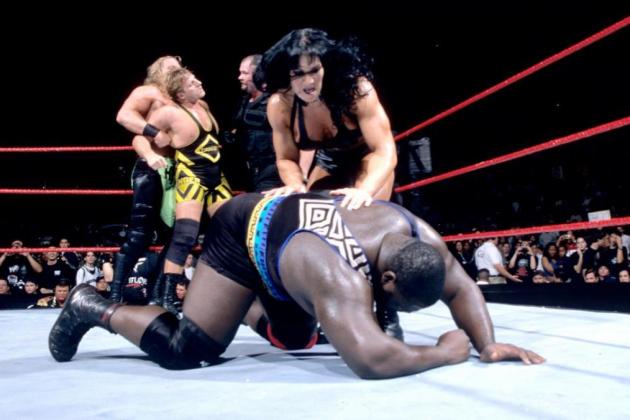 WWE's traditional first pay-per-view of the year is never short on surprises.

The Royal Rumble can throw up all kinds of drama for fans: surprise returns, shock winners and incredible eliminations.

Throughout the course of the event's history, there have been some moments in the Rumble match which have left fans stunned. That includes big guys being eliminated by smaller foes, and young rookies having a moment in the spotlight by tossing a legend over the top rope.

Here's a look at the most shocking eliminations in the Rumble match.

Shawn Michaels defied both the odds and the laws of gravity during the 1996 Royal Rumble match.

The previous year had seen Heartbreak Kid win the Rumble in incredible circumstances when he somehow avoided being eliminated by British Bulldog by the narrowest of margins.

However, Michaels made a name for himself in the same match the following year, when he recorded back-to-back victories.

The most significant moment? When he somehow managed to eliminate two of the biggest men ever to step foot inside a ring at the same time.

With Yokozuna and Vader brawling near the ropes, Michaels saw his moment of opportunity. He charged at both men, somehow managing to put them over the top rope at the same time.

It was another incredible act of athleticism from a guy who had somehow held on from his position as the No. 1 entrant to win the Rumble match 12 months previously.

While many shocking Royal Rumble eliminations have been serious and created longstanding rivalries or brawls, others can be more lighthearted.

That was evident in the 2000 Royal Rumble when Rikishi proved it truly was every man for himself when he threw his stablemates from Too Cool over the top rope.

With Rikishi, Scotty 2 Hotty and Grandmaster Sexay all in the ring at the same time, the trio performed their iconic dance routine, much to the amusement of the crowd.

However, that amusement quickly transformed into shock when Rikishi threw both men over the top rope. His look to the duo seemed to suggest he was sorry, but anything goes when it comes to the Rumble.

"Stone Cold" Steve Austin has plenty of history when it comes to the Royal Rumble, not least because he was a winner of the match on three occasions.

The first of those victories came in 1997, albeit via controversial circumstances. As 1997 began, Austin and Bret Hart already had a heated rivalry, but they were about to write another significant chapter to it.

Austin was eliminated from the Rumble when there were just five men left in the match, with Hart throwing him over the top rope. However, the officials missed it, as they were trying to split up a brawl between Terry Funk and Mankind.

He took full advantage of that, coming back into the ring just as Hart was eliminating the fake Diesel and tossed his long-time foe over the top rope and win the Rumble match.

It was perfectly booked, and its timing was impeccable.

Several women have entered the Royal Rumble match throughout the event's history, but Chyna was the first woman to create a moment of history in 1999.

She won a mini-Rumble for members of The Corporation to earn her place in the match and wasted no time in making her presence felt when she marched down the ramp.

With Mark Henry goading her as she approached the ring, Chyna immediately set her sights on the big man.

She laid him out with some brutal forearms, before somehow managing to toss him over the top rope to eliminate him from the match.

It was a significant moment not only for the Rumble match, but also for WWE history when it comes to intergender wrestling.

British Bulldog and Shawn Michaels created history at the 1995 Royal Rumble, when they became the first two men to start and finish the match.

It was an incredible display of endurance from both, breaking new ground in the Rumble match. It also produced a shocking elimination to close the match.

Bulldog thought he had gone the distance and won when he threw Michaels over the top rope. He celebrated but didn't account for HBK producing a magical Rumble moment.

He somehow kept both feet off the floor, dragged himself from the brink of defeat and ended up winning the match himself.

It was a moment which cemented Michaels' position as a main event star in WWE and underlined his supreme athletic ability.

By the end of the 1990s, the feud between "Stone Cold" Steve Austin and Mr. McMahon was reaching boiling point. Their rivalry hit a new height in the Rumble match itself, when they entered as the first two participants.

In a rare moment for the Rumble match, the action quickly focused on what was happening outside the ring rather than inside it, as McMahon and Austin brawled across the arena.

Austin would eventually be beaten down by The Corporation and it looked as though he was done for the night, though The Texas Rattlesnake later returned to the match via an ambulance.

The action was far from over, as Austin eliminated the field and targeted McMahon, who was the other man left standing but had spent the latter stages of the match on commentary. It felt inevitable Stone Cold would win, before The Rock interfered and allowed The Chairman the split second he needed to win.

It remains one of the Rumble's all-time greatest moments.

When you think of shocking Royal Rumble eliminations, there's one that springs to mind more than any other.

When Maven emerged as the first-ever male winner of Tough Enough, it felt inevitable he'd be in for a bright future.

That ultimately never came to fruition, but he was involved in one of the most shocking eliminations in Rumble history when he threw Undertaker over the top rope.

Few could believe what had happened. The Deadman was on a tear during the match, eliminating people at will. But he hadn't accounted for Maven and clearly didn't consider him to be any trouble.

However, Undertaker turned his back and Maven hit him with a drop kick to eliminate The Phenom. Of course, the WWE legend responded by beating down his young rival, but it was undoubtedly one of the most surprising moments in the history of the Rumble match.