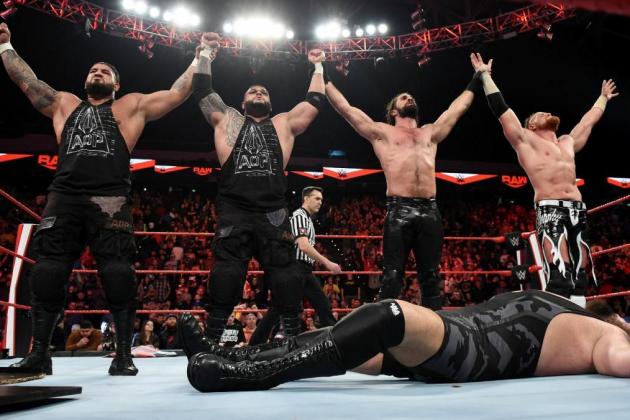 Monday's episode of Raw, headlined by what was billed as the first fist fight in WWE history, garnered an average of 2.03 million viewers, according to Figure Four Weekly's Bryan Alvarez.

That figure was down from the 2.39 million viewers Raw drew last week with the return of WWE champion Brock Lesnar after several weeks away.

Lesnar appeared again Monday, but much of the focus was on the main event, which featured Seth Rollins and AOP against Kevin Owens, Samoa Joe and Big Show in a fist fight.

Those six Superstars faced off in a traditional six-man tag team match last week, but Monday's bout was essentially an all-out brawl that could only end when the referee determined that all three members of one team were incapacitated.

Rollins and AOP won the match, but they received some unexpected help from Buddy Murphy, who was sulking outside the ring after this third consecutive loss to Aleister Black. Rollins appealed to him for a helping hand, and Murphy obliged, which seems to suggest he has joined forces with Rollins and AOP.

After Paul Heyman announced last week that Lesnar would enter the Royal Rumble match at No. 1, he provided a "spoiler" Monday by saying that The Beast would mow down the competition. R-Truth made the ill-advised decision to interrupt, and he was beaten down by the WWE champion.

Other key moments on Raw included Drew McIntyre gaining momentum ahead of the Royal Rumble with a win over AJ Styles and Randy Orton in a Triple Threat match and Bobby Lashley beating Rusev after The Bulgarian Brute was distracted by an altercation between Lana and Liv Morgan outside the ring.

It was then announced that Lashley and Lana will face Rusev and Morgan next week in a Mixed Match Challenge.

Also, Raw Women's champion Becky Lynch and Asuka held the contract signing for their match at Royal Rumble. Not surprisingly, the segment ended in confrontation when The Empress of Tomorrow blinded Lynch by spitting mist in her eyes.

After that, The Man vowed to get revenge on Asuka and finally beat her after Asuka defeated her at last year's Royal Rumble.

Next week's Raw promises to be a big one with the final build toward Royal Rumble, plus a ladder match between United States champion Andrade and Rey Mysterio.