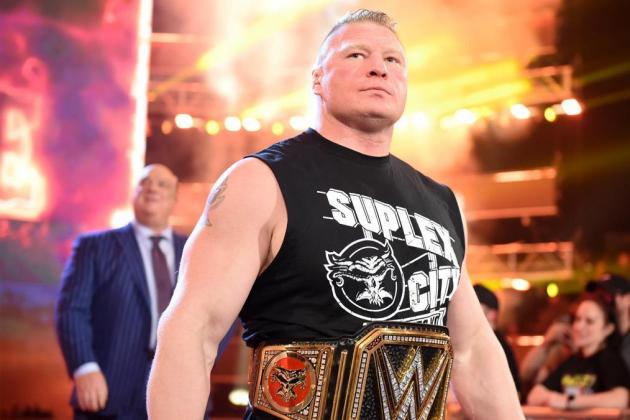 Brock Lesnar is the WWE champion and that would usually mean he would face the winner of the Royal Rumble at WrestleMania, but this year is different.

The Beast Incarnate has not only chosen to enter the match himself, but he is also going in at No. 1. This means he has to outlast 29 other Superstars if he is to win the Rumble on January 26.

Whether he claims victory or not, Lesnar is going to be at WrestleMania 36. While he may not have a current rival, there are a handful of Superstars who have good reasons to challenge him from a storyline perspective.

If somebody does eliminate Lesnar from the men's Royal Rumble match, it could kick-start a feud and set up their eventual showdown at the biggest show of the year.

Let's take a look at the five most likely 'Mania opponents for the WWE champion.

If there is anyone who should be chasing a title shot from Lesnar, it's the man The Beast defeated in less than a minute to win the WWE Championship.

Kofi Kingston's reign ended abruptly on the October 4 episode of SmackDown, and he has never received a rematch. Automatic rematches are a thing of the past, but WWE never booked him to be bitter about losing the title. Maybe he should be, though.

Kingston was the first African-born WWE champion. This was a huge milestone and a lot of people were upset to see the company job him out to The Beast after six successful months as the titleholder.

Seeing him get a rematch after winning the Royal Rumble would be awesome, and seeing him defeat Lesnar for the title would be even better. This would be a feel-good moment on the same level as Daniel Bryan beating Triple H, Randy Orton and Batista at WrestleMania 30.

Randy Orton is embroiled in a feud with AJ Styles that has seen both men steal each other's finishing moves, but it's not a storyline that will last through WrestleMania.

The Viper is going to need a different opponent for The Show of Shows on April 5 and getting back into the hunt for the WWE Championship should be at the top of his to-do list.

His last encounter with The Beast ended with Orton bleeding from his head after Lesnar opened him up the hard way. He has never been able to get his revenge.

The Viper doesn't necessarily have to win the Rumble to earn a title shot, but he would become only the second person to claim victory three times in the match if he did.

Both Orton and Lesnar are still capable of performing at a high level., and it would be great if they had a chance to have a real match instead of the squash we saw at SummerSlam 2016.

Drew McIntyre has been viewed as a potential main event star for some time, but WWE only recently began pushing him that way.

Monday's Raw saw The Scottish Psychopath pick up one of the biggest wins of his career when he scored a clean victory over Randy Orton and AJ Styles in a Triple Threat match.

Building up McIntyre could be an indication WWE has big plans for him during WrestleMania season, and that might mean a win at the Royal Rumble.

Lesnar has faced almost every top star in WWE, many more than once, but McIntyre would be a fresh opponent who has the ability to test him on a physical level.

This would be an intense, hard-hitting matchup that could live up to the expectations fans have for the WrestleMania 36 main event.

Cain Velasquez came into WWE like a wrecking ball and immediately earned a shot at the WWE Championship at Crown Jewel, but Lesnar put him down in 88 seconds.

Since Velasquez beat Lesnar for the UFC Heavyweight Championship in 2010, they each hold a victory over the other. WrestleMania could be where the rubber match takes place.

We haven't heard from him since he lost to Lesnar in Saudi Arabia on October 31, so an appearance at the Rumble to set up a rematch at WrestleMania would be a welcome surprise.

Some members of the WWE Universe might scoff at this match but it would be a huge draw, especially for casual fans.

WWE is definitely going to make this rematch happen at some point, and it deserves to take place at a more important event than one of the company's glorified house shows on WWE Network.

The last time Roman Reigns clashed with Lesnar, the WWE Universe booed The Big Dog out of the building. A lot has changed since then.

Booing Reigns became the trendy thing to do for a couple of years just like it was cool to jeer John Cena when he was the top star. A lot of fans did not actually hate him.

When he revealed his leukemia to the world, all of that false hatred melted away and Reigns has remained one of the most popular stars since he returned in early 2019.

WWE has been cautious in not putting him right back into the chase for gold but that can only last so long. Eventually, the former WWE champion is going to want that belt back.

This is a second chance for Reigns to win the Royal Rumble as a hero and challenge Lesnar at WrestleMania 36. If there was ever a perfect time to retry a storyline, this is it.

The WWE title may be on Raw but WWE has usually let the winner of the Rumble choose which title they want to go for. Reigns is the best option at this point, even if some fans don't want to admit it.