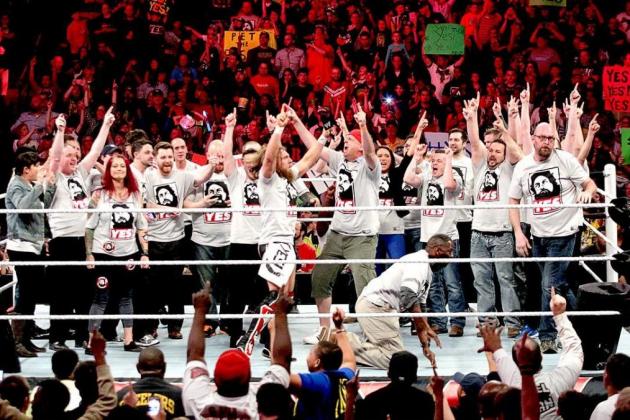 Over eight years on from its first airing on WWE TV, it's incredible to imagine that just one simple word propelled Daniel Bryan to becoming the hottest act in professional wrestling.

A chant that gained momentum thanks to poor booking from WWE has proved to be one of the company's happiest accidents. The chant—and the performer behind it—have evolved significantly since its introduction, to the point that it remains as memorable on-screen as it always has been.

This is how the "Yes!" chant has taken shape throughout the past decade ahead of the latest chapter in Bryan's career at the Royal Rumble on January 26.

To trace the history of Yes! as a chant, you have to go back over a decade to life outside of professional wrestling.

Bryan has said in the past that the origins for the chant in his own career came via MMA, and specifically from Diego Sanchez.

As the video above illustrates, Sanchez would walk to the Octagon chanting the word Yes! long before Bryan adopted it in WWE. What's more, Sanchez was far more intimidating in his use of the catchphrase, and though it wasn't exactly repeated by the crowd, the nature in which Sanchez chanted it certainly had an impact.

It was here that the Yes! chant really began, and as Bryan's career in the main event scene on WWE began to flourish, it wouldn't be long before he found the perfect opportunity to implement it in his own character on screen.

The evolution of the Yes! chant didn't come from anything positive.

WrestleMania XXVIII was arguably the nadir of Daniel Bryan's WWE career. He was humiliated by losing his world title match against Sheamus in just 18 seconds. To book that to happen to a performer who already had plenty of appreciation from fans was a disastrous move.

Fans rebelled the following night on Raw, attempting to drown out almost every single Superstar who entered the ring for either a match or a promo by chanting one word: Yes!

The movement quickly grew. WWE saw that and produced merchandise to try to seize the moment.

But it was a story that was only just beginning.

As the chant became a mainstay of WWE events, Bryan and the company took advantage of the movement brilliantly.

That included D-Bry seemingly rejecting the crowd's support at one stage, chanting No! while they all cheered Yes! in reply. It was incredible and unlike anything else in pro wrestling at that time.

That angle evolved into Bryan going to faux anger management classes, teaming up with Kane and just generally becoming more and more popular as the weeks and months went on. The fact that they claimed the tag titles was simply an added bonus.

The storyline which culminated with Bryan winning the WWE Championship at WrestleMania 30 started in essence at SummerSlam 2013, when Triple H screwed Bryan out of the title to allow Randy Orton to cash in his Money in the Bank briefcase.

That was a seminal moment in both the career of D-Bry, as well as the Yes! chant itself. But later that year, there was another huge moment for the Yes! chant's evolution.

With The Authority holding court in the middle of the ring to discuss the company's future plans and the unveiling of a new title, the crowd decided to take over.

They knew who they wanted at the top of the mountain. They wanted Daniel Bryan, and chanted his name non-stop. Mark Henry's decision to raise his hand caused even more of a noise, and allowed everyone to break out into the Yes! chant.

You can imagine WWE beginning to learn backstage that it had a star on its hands. It was nights like these whicih underlined the power of a strong crowd, and the momentum they can help generate for a wrestler. It helped take him, and the chant, to the next level.

Though the Yes! chant is clearly manufactured and designed for crowd interaction, there have been several moments along the chant's journey where it has organically grown beyond belief.

One of those moments was the 2014 Royal Rumble.

By this time, Bryan was in the midst of a feud with The Authority, who were screwing him at every turning. Bryan actually opened the show that night, fighting against Bray Wyatt, but given he was so popular, fans were expecting him to pull double duty and win the Rumble match itself.

Not only did that not happen, but Bryan failed to even appear in the match. It was a moment that forced fans to turn on the company even more, showering the final moments the match with chants for Bryan: as well as repeated calls of Yes!

Those calls only intensified when it became clear Batista was going to be winning the Rumble match, and setting up a main event with Randy Orton at WrestleMania. Of course, as everyone knows, Bryan managed to muscle his way into that match and steal the entire show.

When Rey Mysterio entered the match last, he was showered with boos he probably didn't deserve. But this was supposed to Bryan's night in the eyes of the fans, and when it became clear he wouldn't be closing the show, the Yes! chant went to the next level in terms of popularity as almost everyone sided with the sport's unlikely hero.

Bryan was the most over performer in the world of pro wrestling. He had once again accepted the Yes! chants, left the No! movement behind him and become the biggest babyface in WWE.

There were several crucial moments along the way to his night of triumph at 'Mania. The angle wherein he seemingly became a member of The Wyatt Family before turning on Bray was huge. It solidified his status as the must-see performer in WWE.

The night when the Yes! movement hijacked Raw leading up to Mania was also crucial. It was unlike anything WWE had done with a chant before and allowed Bryan to exploit his overwhelming fan support.

Randy Orton also played an excellent foil for Bryan throughout the storyline. Orton was a fantastic villainous champion, and for the Yes! chants to become an even bigger success, it needed a heel to try to reject them at every opportunity.

Orton did that brilliantly, but Bryan's role was essential.

As the Yes! chant took over the world of professional wrestling, it was perhaps inevitable that eventually, it was going to leak into mainstream sports away from the squared circle, too.

As WrestleMania 30 rolled around and Bryan's popularity was at an all-time high, the Yes! chant found its way elsewhere.

With Mania just weeks away, supporters of Michigan State's football team adopted the chant, led by player Travis Jackson, a junior center for the side.

It was a moment that underlined how Bryan and the Yes! chant had solidified its place in sporting culture, and how he had helped take WWE into the mainstream masses, and the homes of millions of people who may otherwise have been unaware about pro wrestling.

It didn't stop there. The Seattle Seahawks tweeted a picture saying Yes! Yes! Yes! on when they won Super Bowl XLVIII in 2014. Everyone seemed to be riding on the Yes! wave, and though the culmination of Bryan's story at Mania 30 was perhaps the top of the mountain, it remained popular in the years ahead.

When Bryan was forced into an early retirement and became an on-screen authority figure, the Yes! chants remained, albeit on a slightly more subdued level.

But in March 2018, when he was cleared by doctors to return to in-ring competition, the Yes! chants evolved once again. They became louder and louder, as fans were once again able to see one of the most beloved performers in recent memory step between the ropes and fight again.

The night Bryan was cleared and he announced his return was emotional, and it was also arguably the loudest the Yes! chants have ever been.

Since then, Bryan rejected the Yes! movement all over again with a heel turn in November 2018, but as he heads for another showdown with Bray Wyatt at Royal Rumble, he looks to have embraced the fans once more.

It's the constant evolution of both Bryan's character and his approach towards the chant that has made it one of WWE's most enduring movements in years.

Don't expect it to die down anytime soon, either.