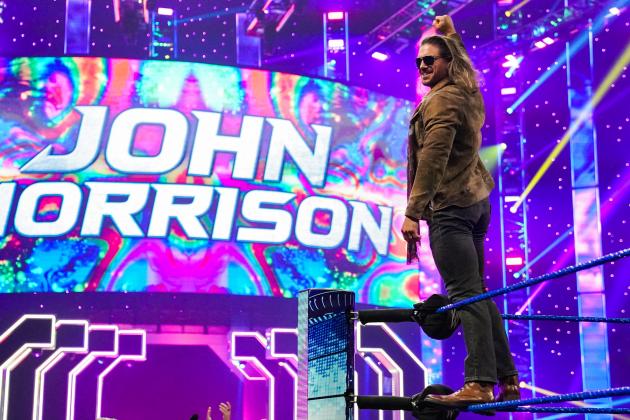 The march to the 2020 Royal Rumble continued on Fox Friday night as the stars of SmackDown looked to build on the momentum of last week's broadcast, which saw a number of competitors make anticipated returns.

One such Superstar was John Morrison, who made his first in-arena appearance this week as a guest on Miz TV. What would The Shaman of Sexy have to say in his first opportunity to address the WWE Universe?

The Usos also made a stunning return, coming to the aid of Roman Reigns as The Big Dog found himself on the receiving end of a beatdown at the hands of Dolph Ziggler and King Corbin. Jimmy and Jey battled the 2019 King of the Ring and The Showoff in a blockbuster tag team main event this week.

Who emerged victorious as Lacey Evans battled Sasha Banks, and what else went down on the January 10 broadcast? Find out with this recap of the show.

The Miz kicked off this week's show by introducing John Morrison for the latest edition of Miz TV. The Hollywood A-Lister threw to a video package recapping his guest's accomplishments and abilities before Morrison revealed he originally had a grand return in mind, complete with small dogs ("because there's only room for one Big Dog").

Morrison admitted disappointment in the fans for booing The Miz when he had one bad day. He recapped the accomplishments of his former tag team partner before New Day's music played and Kofi Kingston and Big E interrupted.

A verbal back-and-forth gave way to Kingston saying his rival was reverting back to the whiny, annoying Miz. Michael Cole revealed the two former WWE champions would clash after the break.

This felt like a lackluster way to utilize Morrison in his first in-ring appearance in nine years. He was funny, sarcastic and dropped a great one-liner about Roman Reigns, but it was still a rather cold return for a Superstar who fans are hoping provides the show with a spark.

That the entire segment was designed only to set up a rematch between Kingston and Miz only makes it that much more disappointing.

Miz withstood an early onslaught to ground Kingston with a rear chinlock. The popular babyface fought back and wiped Miz out with a tope suicida heading into the break.

Back from commercial, Miz countered Trouble in Paradise and targeted the knee of his opponent. He followed up with Yes Kicks, but an errant one led to a rollup for a two-count by Kingston. Kofi followed with SOS for another two and blasted a charging Miz with double boots to the face.

Looking to build on the work he had already done on the knee of Kingston, Miz applied the Figure Four, hoping for a tapout as Big E willed his partner on from ringside.

Miz rolled outside and attempted to incite a reaction from Big E, providing a distraction that allowed John Morrison to fly in from out of nowhere and wipe the powerhouse of The New Day out.

Back inside, Miz finished Kingston with the Skull-Crashing Finale.

Miz and Kingston have worked with each other so often over the course of their careers that their in-ring chemistry is undeniable at this point. They know each other extremely well, and they can string together sequences that keep fans engaged and false-finishes that pop audiences.

This was no different.

The high spot by Morrison that set up the finish was a nice addition to the match and gave audiences a taste of what they can come to expect from the returning star as he re-establishes himself with the company, and the outcome propels the storyline forward.

While it may not be the most dynamic program on the surface, the personalities at play will make for some outstanding segments if allowed to cut loose.

Bliss unleashed early until a well-timed distraction from Deville at ringside allowed the Golden Goddess to seize control of the bout. She wore Bliss down with a headlock.

Bliss fought back, though, and appeared poised to pick up the win when Heavy Machinery's music interrupted. The appearance of Otis and Tucker provided the distraction that allowed Rose to roll her opponent up for the pinfall victory.

There really wasn't much to the match, but it never really intended to be anything special. The meat of this segment was the involvement of Otis and the cake that Rose presented him with earlier in the show.

That is the primary storyline for Rose at this point, not a back-and-forth rivalry with the former women's tag team champions.

The intrigue of Deville's take on the budding romance remains one of the better elements of the storyline.

Lacey Evans made her way to the squared circle for her advertised match with Sasha Banks. Unfortunately, The Boss never made an appearance. Instead, SmackDown women's champion Bayley appeared and informed the audience that her friend and tag partner was in Los Angeles and couldn't be bothered coming to tonight's show.

Evans balked at the explanation, to which Bayley said she was not Evans' snot-nosed kid and would not be approached as such.

The Sassy Southern Belle took off backstage, where she encountered the champion.

The two competitors brawled, each getting the best of the other before Bayley retreated.

This was a much more effective segment than a singles match between two women who cannot really afford a loss at this point would have been.

The intensity shown by Bayley and Evans in the backstage brawl was on-point and absolutely necessary for the program to maintain its momentum. The dislike feels real. Evans cuts her promos with great conviction, and the result is, low-key, one of the best programs in all of WWE right now.

In pursuit of his first singles championship in WWE, Braun Strowman battled intercontinental champion Shinsuke Nakamura in non-title action Friday night and found out early he would have to combat interference from Cesaro and Sami Zayn if he was to emerge victoriously.

Strowman dominated early, bumping the champion around the squared circle, but the interfering Swiss Cyborg sent The Monster Among Men into the ring post, and Nakamura followed up, sending Strowman crashing into the timekeeper's position heading into the commercial break.

The Artist controlled the pace of the match following the timeout, even downing Strowman for a quick two-count. The champion tried for an attack off the middle rope, though, and ate a big clothesline from his opponent. Strowman surged, clubbing the champion's chest with his massive forearm for a near-fall of his own.

Nakamura halted the babyface's onslaught with a running knee for another two-count.

Cesaro and Zayn interfered again, this time to no avail as Strowman staved it off and finished Nakamura with a running powerslam for the pinfall victory.

As the latest chapter of an ongoing storyline designed to further present Strowman as the number one contender to the intercontinental title, this worked. That the big man and Nakamura had better-than-expected in-ring chemistry, and Zayn and Cesaro stayed involved just enough to create the idea that the heels may triumph, only helped the overall presentation.

Strowman has been through so many ups and downs—teased with major championship wins only to endure disappointing defeats—that the least SmackDown creative can do is give him a run with the prestigious midcard title.

The heel stable of Nakamura, Zayn and Cesaro has, to this point, been the perfect opposition for him.

Prior to the main event of the evening, Roman Reigns cut a promo in which he vowed to win the Royal Rumble and main event WrestleMania for the fifth time. He introduced The Usos, but their promo was interrupted by King Corbin and Dolph Ziggler. A back-and-forth gave way to a staredown heading into the commercial break.

The heels worked over Jey Uso for the early portion of the bout until a hot tag to Jimmy sparked a momentary babyface comeback. An appearance by The Revival, described by the commentary team as members of King Corbin's Court, allowed the heels to regain control of the bout.

Reigns reappeared heading into the final break of the night.

Action broke down following the commercial, with The Usos unloading on the heels. As Corbin established dominance, Reigns unleashed a spear on Corbin, drawing the disqualification. Before The Big Dog could further punish his rival, Robert Roode came from out of nowhere, planting Reigns on the floor.

The heels beat down Reigns and The Usos, taunting the former by bringing him face-to-face with his fallen family members. Roode put an exclamation point on the attack with a spinebuster on the commentary table. Ziggler added an elbow drop through the table for good measure.

Corbin and Ziggler defeated The Usos via disqualification

One of the things WWE does really well is faction warfare, something that was on display in the closing moments of the night's show.

Just as Reigns and The Usos thought they had gained the upper hand on the heels, Roode returned to turn the tide in the villains' favor. The battle for supremacy between the trios, with the wildcards of The Revival lurking, has made for the best main event feud in the company.

The question now is whether WWE Creative can sustain the momentum heading into and coming out of the Royal Rumble, where it is unlikely it will come to a head. Does WWE have enough fresh content to keep fans engaged leading to the inevitable blow-off?

For now, let the writing team revel in the fact that it provided a damn good conclusion to this episode, making two straight fantastic broadcasts for the blue brand.