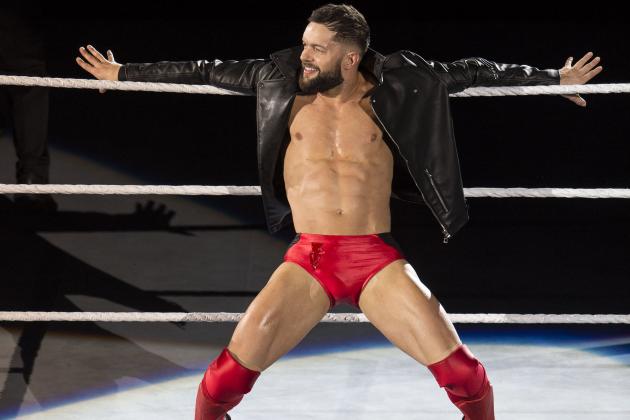 Balor vs. Dragunov, Ripley vs. Storm Added to Worlds Collide

After their interaction on Wednesday's NXT, Rhea Ripley and Toni Storm will meet at Worlds Collide with Ripley's NXT Women's Championship on the line. Also, Finn Balor will face Ilja Dragunov in a singles bout.

Ripley and Storm have some history, as Ripley beat Storm in the finals of a tournament to become the first-ever NXT UK Women's champion. Storm later won the title from Ripley, but she then dropped it to Kay Lee Ray.

At NXT UK TakeOver: Blackpool II on Sunday, Storm will face Ray and Piper Niven in a Triple Threat match for the NXT UK Women's Championship, meaning it could be champion vs. champion at Worlds Collide.

The match between Balor and Dragunov has a chance to steal the show, especially after Dragunov and Cesaro faced off in a spectacular match at NXT UK TakeOver: Cardiff in August.

Balor is likely to win so he has momentum entering his match against Johnny Gargano at NXT TakeOver: Portland, but it should be a hard-hitting and entertaining affair nonetheless.

Some fans were apprehensive when it was announced that Worlds Collide would be held Royal Rumble weekend rather than a traditional TakeOver, but the card is shaping up to be a good one, and it could be an ideal lead-in for the Rumble.

It has long been assumed that free-agent wrestler Marty Scurll would leave Ring of Honor for the perceived greener pastures of WWE or AEW, but that may not be the case.

According to Dave Meltzer of the Wrestling Observer Newsletter (h/t WrestlingInc.com's Daniel Yanofsky), ROH is offering Scurll "WWE main roster money" and he would only have to work 40 dates per year if he takes the offer.

Mike Johnson of PWInsider (h/t H Jenkins of Ringside News) added that Scurll is close to a deal with ROH, but it isn't yet set in stone.

Scurll reportedly isn't under contract currently, but he is continuing to work with ROH and recently debuted for NWA as well.

Since joining ROH in 2016, The Villain has developed into one of the company's top stars. Although he has yet to win the ROH World Championship, he has held both the Television and Six-Man Tag Team titles.

Scurll also formed the Villain Enterprises stable with PCO, Brody King and eventually Flip Gordon, which speaks to how much faith ROH has put in the Englishman.

ROH has fallen well behind AEW when it comes to being the No. 2 North American wrestling company, and since Scurll was once part of The Elite with Cody, The Young Bucks, Kenny Omega and Adam "Hangman" Page, it seemed likely that he would eventually make the leap to AEW.

WWE has also signed much of the top independent wrestling talent and allowed it to thrive in NXT as well, which could have made that a viable option for Scurll.

While the spotlight may not be on him as much if he remains in ROH, accepting such an enticing contract would certainly be understandable.

AEW added a big match to Wednesday's AEW Dynamite: Bash at the Beach show in Miami, Florida, on Friday in the form of Jon Moxley vs. Sammy Guevara:

Just signed for Next Wednesday, January 15th’s #AEW’s Bash at the Beach LIVE from Miami ... @sammyguevara vs @JonMoxley ... get your tickets now at https://t.co/UN1cNj1kQq or watch at 8/7c on @tntdrama pic.twitter.com/8z2Esl8zZn

After Moxley said he would join the Inner Circle to close this week's Dynamite, he turned the tables on AEW World champion Chris Jericho by attacking him instead. Guevara tried to make the save, but he was laid out with a Paradigm Shift DDT as well.

It seems as though a Jericho vs. Moxley clash for the title is inevitable, so Moxley may be forced to run the Inner Circle gauntlet in the coming weeks and months.

Guevara is on a roll with wins over Dustin Rhodes and Christopher Daniels the past couple of weeks, but beating Moxley would be his biggest win by far.

Other matches scheduled to take place on Dynamite are Pac vs. Darby Allin, MJF, The Butcher and The Blade vs. DDP, Dustin Rhodes and QT Marshall, and Kris Statlander and Hikaru Shida vs. Awesome Kong and Mel of the Nightmare Collective.

Most of the focus will be on Moxley, though, and what step he takes next in his attempt to knock Jericho from his perch.