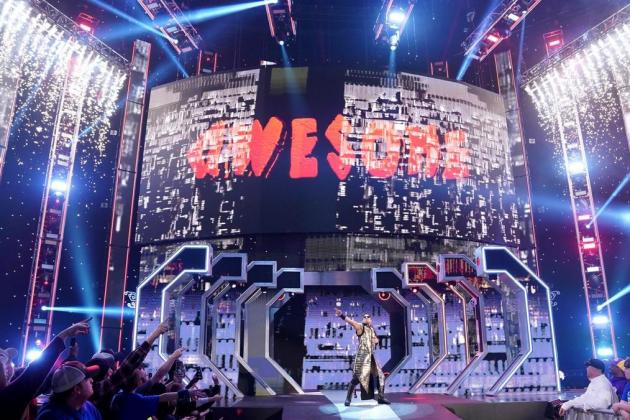 That is a lesson some of the more talented Superstars on the WWE roster find out the hard way.

Lacking only a character makeover that would finally bridge the gap between them and the audience, they flounder in midcard mediocrity despite a second-to-none in-ring arsenal.

Over the past decade, we have watched as Daniel Bryan, The New Day, Sheamus and universal champion Bray Wyatt have all benefited exponentially from the repackaging of their on-screen personas, climbing to heights they otherwise may not have had they stuck it out in their stale, going-nowhere characters.

With 2020's arrival, it is time for a handful of the talented men and women on the WWE roster to embrace change and for WWE Creative to give them shots at stardom via character tweaks.

Apollo Crews is far too talented to be wasted the way he has been since his arrival on WWE's main roster shortly after WrestleMania 32 in 2016. One of the most athletically gifted performers in professional wrestling, what he is capable of between the ropes is not reflected by his lack of push or the creative efforts put into ensuring he thrives with the company.

Taking the time to repackage Crews, completely changing his character and giving fans something they can sink their teeth into, would allow him a rare second chance at a first impression. Let him wow the audience with his flips, dives and raw power while engaging them with a new persona. Even the slightest effort would be infinitely better than the total lack of attention paid to him now.

Crews' efforts between the ropes have never been in question. Now is the time to get the most of him as a performer beyond the idea that he's just a really good wrestler.

The worst recent attempt of repackaging a Superstar who did not need it occurred in the fall when WWE renamed Chad Gable as Shorty G and dressed him like an elementary school student ready for phys ed.

The new name and look killed any and all momentum he had built for himself throughout the King of the Ring tournament. Worse yet, the name alone is cringeworthy.

No longer an underdog with momentum on his side, he was tossed into a tag team with the criminally underutilized Mustafa Ali and left to labor in mediocrity, with the pair glorified jobbers for the rest of the tag division.

Gable deserves better. What he accomplished by getting over to the level he did in that aforementioned tournament was nothing short of miraculous. He forced WWE's hand, and the company repaid him with a gimmick worthy of WrestleCrap. Let him be a wrestler, let him beat people by out-wrestling them and tweak a few things here or there along the way.

The total reboot, for inexplicable reasons besides selling action figures, was wholly unnecessary and plain stupid.

The highest-profile Superstar on this list, The Miz has been The Hollywood A-Lister in some form or fashion for the past six years. His shtick is old, and turning him babyface earlier this year did nothing to mask that.

In fact, outside of a brief moment or two during the Shane McMahon storyline, he has remained the same stale character he has been for more than half of a decade.

We have seen hints that may be changing, especially after his recent interactions and match with Bray Wyatt. The return of former tag team partner John Morrison could help exponentially too.

However it happens, whatever it takes, Miz must kickstart the new decade with a new on-screen persona. Otherwise he will waste away, with his character staler than month-old bread, forever stuck in the midcard abyss in WWE.

At some point, Tony Nese needs to be known as more than the guy with eight abs.

The former cruiserweight champion is a treasure trove of athleticism and has all of the confidence in the world, yet he has failed to get over with audiences despite an in-ring game as strong as anyone's in WWE. Much of that can be attributed to the total lack of character development.

Like Apollo Crews, Nese would receive an incredible boost from a single creative writer expending just an ounce of effort into creating a character for him that he could then mold into his own rather than just walking through the curtain as the cocky, arrogant super-athlete with muscles. In the 1980s, that shtick may have gotten him over enough to pal around with The Hulkster, but in 2020, he needs something more.

Even if it is throwing him and the aforementioned Crews in a stable with a manager who could get them over as badass athletes for hire who do the dirty work no one else wants to.

Whatever the case may be, Nese is yet another athlete whose prime is being wasted on matches that may be great but whose ability to engage audiences is lacking because Joe Blow in the first row has no reason to care about him in this form.

Dana Brooke is a disappointing addition to this list, if only because few have worked as hard to better themselves and become as quality an in-ring performer as she has. When she arrived on the main roster in 2016, she was woefully underprepared to share the ring with the likes of Becky Lynch, Bayley, Sasha Banks and Charlotte Flair. Effort and determination fueled her to become better, and she has.

Unfortunately, she has no character to speak of and has struggled to maintain her connection with audiences despite the tremendous strides she has made as an in-ring performer.

Having played both a heel and babyface since her arrival, her fix is not something as simple as a quick turn. She would have to undergo a character makeover, not unlike that of Liv Morgan, who has seen her star elevated on the heels of a few pre-taped vignettes and a buzz-worthy shock TV angle.

Brooke does not necessarily have to follow that example, but a character makeover that allows her to keep her athletic in-ring skill set would benefit her no end—and perhaps find her that on-screen consistency she has been vocal about desiring.