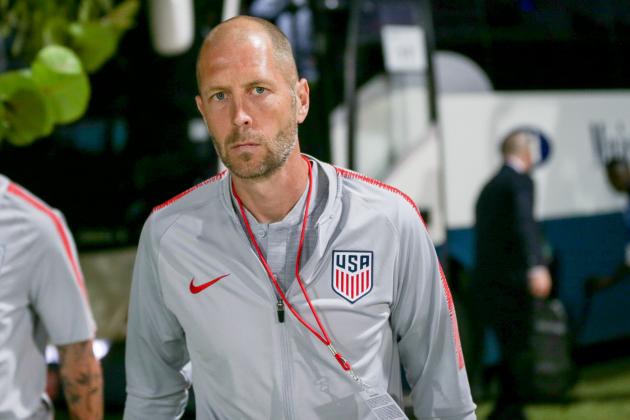 The United States men's national team have been handed a difficult qualifying group for the 2020 Tokyo Olympics football tournament after being drawn against Mexico and Costa Rica.

Honduras are the top-ranked side in a much weaker Group B:

The groups are set for the 2020 Concacaf Men’s Olympic Qualifying 🙌#CMOQ
Who will represent Concacaf in @Tokyo2020? pic.twitter.com/MWPJgDwbPO

U.S. Soccer shared the USMNT's full group-stage schedule for the qualifying tournament, which will be hosted by Mexico in Guadalajara:

Our path to #Tokyo2020 is set. @Concacaf, we’re ready for you! 💪 pic.twitter.com/nsRbE4EBEs

Per Caitlin Murray for Pro Soccer USA, the top two sides from each group will advance to the semi-finals, and the two semi-final winners will secure qualification for Tokyo before facing off against one another in the final on April 1.

The United States, bidding to reach the men's Olympic tournament for the first time since 2008, will have been hoping to avoid Mexico.

El Tri beat them 1-0 in July in the CONCACAF Gold Cup final and 3-0 in a September friendly.

However, the structure of the qualifying tournament could work out for both sides:

The silver-lining for Mexico and the United States: If they finish in the top two of Group A, they won't have to face each other in a semifinal match that would decide whether they go to the 2020 Olympics or not. #ElTriEng

The USA will still likely have to beat Costa Rica to ensure they progress to the semi-finals, but they beat them 2-0 in their most recent meeting in February last year. They'll also have a practice run when they face Los Ticos again in a friendly on February 1.

Former USA international Stu Holden also suggested the draw could work out in their favour:

I think this draw is somewhat favorable... a little room for error in group stage and then in a one off a *potentially*.... easier opponent. (Yes remembering we lost to Honduras)

As Holden noted, Gregg Berhalter's side will be wary of Honduras, who beat them 2-0 in the semi-finals of the qualifying tournament for the 2016 Olympic Games.

The U.S. then beat Canada in the third-place game to face Colombia in an inter-continental play-off, but they lost to Los Cafeteros and missed out on the tournament. There will be no third-place match this time around.

The men's Olympic event is for under-23 players, though—aside from three senior picks by the manager—so it's unlikely there will be many veterans of that 2015 match involved for either team.

Another potential semi-final opponent is Canada. The Canadians won 2-0 when they met in the CONCACAF Nations League in October, but the Americans ran out 4-1 winners against them the following month.

We'd like to send you the most entertaining United States (National Football) articles, videos, and podcasts from around the web.