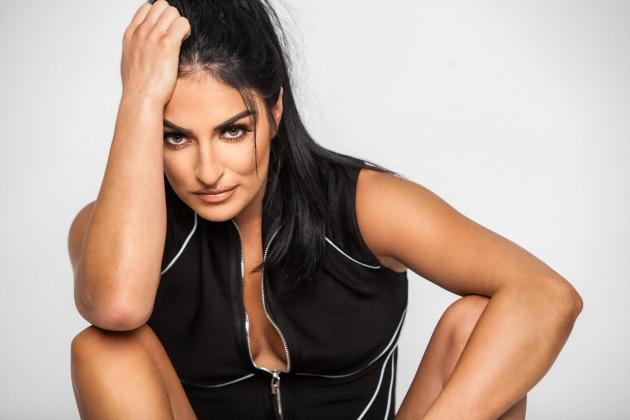 In the ring, Sonya Deville is one of the brightest young stars on the WWE roster, a former MMA fighter with a penchant for smashing and striking alongside Fire & Desire tag team partner Mandy Rose. Outside of it, Daria Berenato, the first out female performer in the history of Vince McMahon's sports-entertainment promotion, fights for LGBTQ representation in wrestling's most prominent company.

Her cryptic reaction on Twitter to the Dec. 30 wedding of Bobby Lashley and Lana, during which a same-sex relationship between the bride and the returning Liv Morgan was teased, drew the attention of fans:

In this exclusive interview with Bleacher Report, the Friday Night SmackDown star discusses the controversial segment, her efforts to ensure equality on WWE programming, alternative means of connecting with fans and her own future aspirations.

B/R: Let's address the elephant in the room: WWE introduced a lesbian storyline to its programming, almost in 'shock TV' fashion. Your reaction on social media spoke volumes. As the first out female performer in WWE, who has been vocal about her desire to introduce a same-sex storyline to the company, how would you describe the emotions you felt watching that angle unfold?

Deville: I mean, at the end of the day, we work for a sports-entertainment company, and the segment was very entertaining. That's not to say Mandy and I don't get our storyline in the future. You know, there's room for plenty of LGBTQ storylines.

B/R: Just to go back to the Raw angle...do you believe it could have been handled better or presented differently than it was?

Deville: I'm not going to comment on that. Sorry.

B/R: Despite all of the good WWE does from a community standpoint, its portrayal of LGBTQ characters has been, for lack of a better word, underwhelming. What do you believe the company must do to change that perception and provide a product that is more inclusive and representative of that particular group?

Deville: I've been working hard over the past two-and-a-half years since I've been on Raw and SmackDown with executives and GLAAD and organizations in trying to do exactly that. I think it's very important to have representation of every human there is, right? Just like you would see on a TV show or a movie in Hollywood.

That's something that's personally important to me and the company as a whole. There's definitely talks going on about more representation in the years to come. I'll definitely make it my personal duty and passion to help pursue those.

B/R: You were introduced to the wrestling world via Tough Enough, competed in the first women's Royal Rumble, fought at WrestleMania and have done battle inside the first women's Elimination Chamber. Are there any goals, short of capturing championships, you would like to achieve between the ropes?

A singles match with Becky [Lynch]. I don't think we've had one, and if we did, it was short, so an extended match with her would be awesome.

B/R: Total Divas is a show that has allowed its audience a look into the everyday, personal lives of its stars. You made your debut in the latest season. Was there any hesitation on your part to open yourself up to a worldwide viewing audience like that?

Deville: Yeah, when I got the call for Divas, I was immediately excited, but I was like, 'Oh, God.' It's a certain level of confidence and balls to put yourself out there. You're not putting a character out there—you're putting your real personality out there. But I just have to say, I didn't think twice about it. This was definitely something I wanted to do.

I think one of the most important things in WWE is to relate to your fans. They want to know who you are, what you stand for, what your voice is. So, if you don't get that across in the ring, Total Divas is this new opportunity to do that, to relate to them. I was like, 'Hell yeah, let's do this!'

You know, when you're first filming, it's nerve-wracking to let that wall down and really let them in, but I think with any successful reality show, I think the most successful people on them are the ones that are most honest. So, I kept that in mind, and I feel like I was able to kind of relax a couple of episodes in. It was a great opportunity, and I'd really like to do it again.

B/R: You and Mandy have developed DaMandyz Donutz, opened an online store in conjunction with it and encapsulated a lot of your social media presence. In your opinion, how important is social media to a performer's career when it comes to connecting with audiences?

Deville: It's vital. It's one of those things where now, with social media, if you're not featured on Raw or SmackDown, it's kind of like your own TV show. Everything in the world is digital now. That's where you create a brand or a personality and a persona for people to either connect with or not connect with.

So DaMandyz Donutz has been so much fun because it's letting fans in on authentically who is Mandy and who is Daria. We love food. We're foodies. We travel around the world, we work out and eat food. It's really cool to let people in on a more relaxed, natural side of who we are.

B/R: Do you ever foresee yourself following in the footsteps of fellow WWE Superstars John Cena, Batista and The Rock and entering Hollywood, especially given that tougher female characters are becoming more prevalent in pop culture?

Deville: Yeah...that's been the dream since day one. I've always had a passion for acting. I've been taking acting classes on and off since I was 14 years on. I've been a natural performer, so that's the next step. I'm taking acting classes currently with Sean Whalen via FaceTime or when I'm out in L.A., and he's been incredible with helping with the next journey in my life.

I think it goes hand-in-hand and coincides with WWE. It's really cool that we get to create this in-ring persona that could correlate to a kickass female on the screen. I definitely want to pursue acting. It's definitely a huge passion of mine, and there's really no female who's made that John Cena/The Rock leap like they have. I'd love to pioneer something like that.

B/R: There's no denying the work that has to be done in WWE from an inclusion standpoint. LGBTQ performers and characters have been underutilized and poorly written for decades. They have been presented mockingly, as punchlines to jokes and in angles designed simply to shock and spark TV ratings.

With Deville as a driving force behind change, the company has the opportunity to right its wrongs and provide a product that is more inclusive and representative of all groups. Her passion is evident, and her desire to bring about change is obvious. Now it's time for a traditionally nearsighted company to meet her halfway and help usher in a new era in which characters of different sexual orientations are treated equally and afforded the same creative consideration.