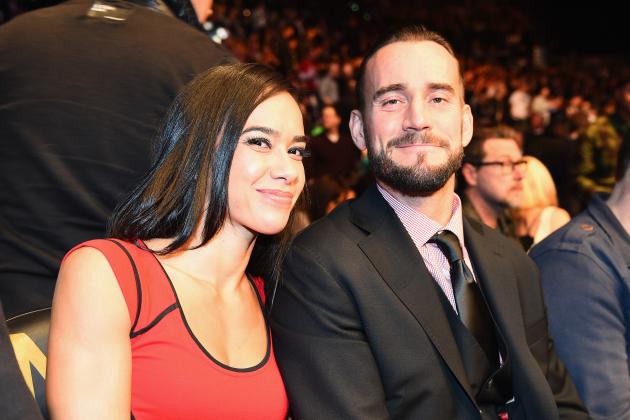 WWE Executive Vice President of Talent, Live Events and Creative Triple H believes there is a chance that CM Punk and AJ Lee could return to the company one day.

Per Alistair McGeorge of Metro, The Game said on a conference call ahead of Sunday's NXT UK TakeOver: Blackpool II that he thinks Punk and Lee could "absolutely" return to WWE at some point if the circumstances are right.

"If it was right for them, for the company, for everyone involved, then absolutely. I don't think that's ever been a factor, of somebody saying, 'This person should be here, or that person should be here.' Incredible talent are always incredible talent—but there's so much more to the business than just being a talented performer. ... I can fantasy book and say I'd like to be young again but that ain't happening too. In a perfect world? Yeah, sure. Again, you've heard Vince [McMahon] echo that sentiment so many times of the years, never say never."

Punk has not wrestled a match since leaving WWE in January 2014. After departing the company, Punk opened up about his frustrations regarding how his injuries were handled and how he was booked.

For years, Punk had essentially nothing to do with wrestling, but that changed recently when he joined FS1's WWE Backstage as an analyst. Punk made it clear that his contract is with Fox and not WWE, and he has appeared on the show a few times so far to offer his thoughts on the WWE product.

The 41-year-old five-time WWE world champion has not openly expressed interest in returning to the ring, but his deal with Fox has led to plenty of speculation that he would be open to it.

Lee, 32, is Punk's wife and was a big star during her time in WWE. A little over one year after Punk left WWE, Lee retired from in-ring competition.

At a time when women's wrestling was not as much of a focus for WWE as it is now, Lee was featured often on WWE programming and received a lot of mic time, which spoke to how much the company valued what she brought to the table.

Lee was also a three-time Divas champion, and she once held the title for 295 days.

It seemed like Lee was ahead of her time, and there is little doubt that she would be a good fit in the current WWE women's division, which features major stars such as Becky Lynch, Charlotte Flair, Sasha Banks, Bayley, Asuka and Alexa Bliss.

Like Punk, Lee has not been outspoken about a desire to return to wrestling, but she could inject even more life into the women's division if she does.

Both Punk and Lee would bring a great deal of star power to WWE, so the company has every reason to be open to their return if they show any interest whatsoever.