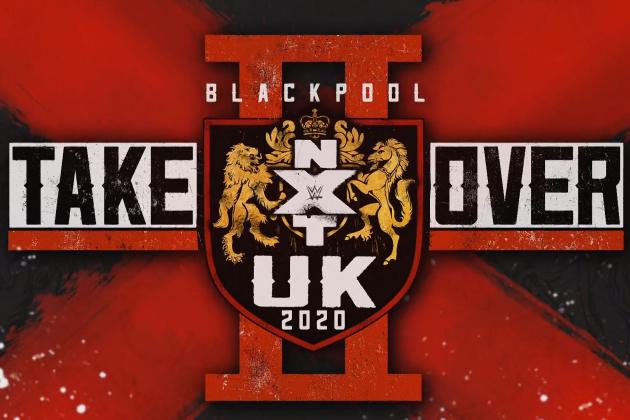 As a spin-off of NXT, which had a great 2019, the brand was looking to tear down the house with collisions such as Joe Coffey against WALTER, a Fatal 4-Way for the tag team titles and Kay Lee Ray defending the women's championship against both Piper Niven and Toni Storm.

How did it all work out? Who was victorious and how good were the matches?

Find out everything you need to know in this recap of the event as we break down the results, grade the matches and more.

For a feud that was largely about Eddie Dennis starting a fight for no reason, Trent Seven was the aggressor at the start.

This was negated quickly, though, and the match turned into an even exchange with relatively little wow factor. It was a textbook match with no standout maneuvers or moments.

As anticipated, this was a means to spotlight Dennis and nothing more. He's back on track as a dastardly heel, having tossed Seven into a member of the ring crew when the referee wouldn't allow him to send him into the exposed turnbuckle.

One more move after that and it was over.

On paper, this was the weakest match of the lineup and it didn't exactly start the show with a bang. There was nothing fundamentally bad about it, but that doesn't mean there was anything good to pinpoint, either.

Had this been a television match, it would have been fine. But since it took up a spot on a TakeOver event, which is precious real estate, this was underwhelming.

WWE could have gotten just as much out of Dennis hitting his Razor's Edge when he had hit Seven with the microphone weeks back and skipped doing this match.

The pace picked up with this match. From the onset, Toni Storm, Kay Lee Ray and Piper Niven had more energy taking the fight to each other than the previous segment, mostly with the two babyfaces focusing on the champion.

There was even a moment when Storm considered hitting Niven with a chair, only for the two of them to go back to taking out their frustrations on Ray.

After a few near-falls that gave each woman a chance to win, Ray was able to capitalize on stealing a pin from Storm's frog splash on Niven.

Result: Ray retained the title with a pinfall on Niven.

This was a major step up from the opening contest but still no Match of the Year candidate by any means. Keeping the belt on Ray is interesting in that it was the least eventful outcome possible.

Having Niven take the fall makes the future of this division even cloudier, as there is no obvious path for a babyface to dethrone Ray, when this felt like the right time to make a change.

The crowd found itself split at times as Jordan Devlin sought to outdo Tyler Bate, who kept up his trend of being a rock-solid player from bell to bell.

Bate had the edge going into this match as the more accomplished of the two and the story being told about Devlin wanting to prove himself dictated the flow.

Most of the bout was driven by Devlin's feverish need to win counteracted by his ego. Every time he was in charge, he got cocky and it stopped him from being able to secure the victory.

Bate's elongated airplane spin and an exchange of nothing but fists to the face were moments the crowd ate up along the way. Everyone was on their feet when the two men kicked out of each other's finishers.

It's an easy formula to take two talented wrestlers, put them in a ring together and let them have a good match, which is what happened here. While there was nothing at stake, Bate and Devlin fought as though the win mattered, which helped sell the match.

It's hard to dislike a bout that got "this is awesome" and "fight forever" chants.

In this standard ladder match, it was a struggle for supremacy that went back and forth between all four teams from start to finish.

Any time someone gained momentum, another stepped in to take them down a peg—sometimes literally yanking them off the ladder as they were fingertips away from the belts.

At one point, there were five ladders in the ring to account for all the Superstars. It was a mess, but in a good way.

There was a planned moment when Flash Morgan Webster and Mark Andrews were supposed to do Swanton Bombs in sync, but Mark Coffey's table broke ahead of time. They switched the plan to a double Swanton onto Wolfgang and made up for it.

Ultimately, though, it was the Gallus team of Coffey and Wolfgang left standing tall with belts in hand.

Ladder matches are almost always the most fun element of any event and this was no exception. This was a brawl with spears through ladders, broken kendo sticks and high-risk spots to keep the energy up the whole time.

Keeping the belts on Gallus was the right move, too. Had they lost the titles this soon, it would have made them seem like transitional champions.

As the underdog and the more tenacious attacker of the two, Joe Coffey did his best to bring the fight to WALTER.

This was a match of two big bulls wailing on each other. The brutes had numerous tests of strength and durability by exchanging chops, slaps, elbows and fists rather than technical mat wrestling.

But there was still room for Coffey to hit a moonsault and other oddball moments here and there to spice things up. Those went a long way in preventing monotony.

After the referee was taken out, Coffey had WALTER beaten with no one counting the pin. Alexander Wolfe stepped in to help the champion, and Ilja Dragunov tried to even the odds.

There was another near-fall after a powerbomb to the apron and a clothesline, but the wait for a new referee gave Coffey a few more moments to kick out.

Surprisingly, the match didn't end soon after that, as Coffey still had fight in him. He absorbed a lot of punishment to his leg and more before ultimately tapping out.

As a bonus, The Undisputed Era attacked Imperium after the match to build hype for their battle at Worlds Collide on January 25.

WALTER has been so dominant that it was hard to believe Coffey had much of a chance to win. However, they avoided making this a waiting game for the inevitable victory for the champion.

Coffey put up a great fight, and the false finishes in the latter half of the match sold that a title change wouldn't be impossible.

The tag with The Undisputed Era was also a perfect way to end the night and get people talking about what's next to come.

Anthony Mango is the owner of the wrestling website Smark Out Moment and the host of the podcast show Smack Talk on YouTube, iTunes and Stitcher. You can follow him on Facebook and elsewhere for more.