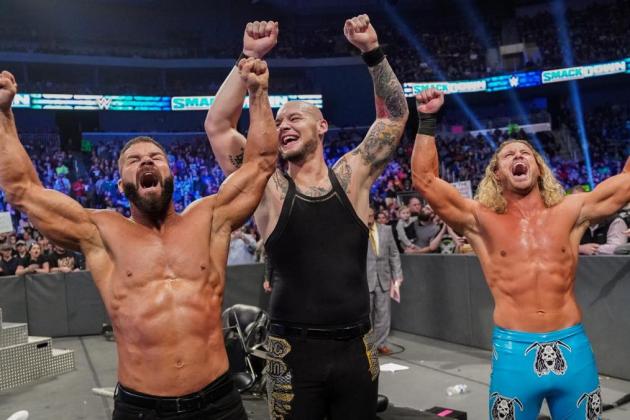 The new year had brought back familiar faces to Friday Night SmackDown, and each return has fans talking. Last week was big, but Friday's edition was just as important.

John Morrison unofficially returned on Jan. 3 in The Miz's locker room, but he was back at his best on Miz TV on Friday. The Shaman of Sexy showed up for his friend and even pulled off an incredible spot afterward for good measure.

Following up on the return of The Usos, King Corbin needed another ally. After a month away, Robert Roode arrived back on SmackDown with vengeance on his mind.

The arrival of Braun Strowman's first single championship reign is on the horizon after he once again pinned intercontinental champion Shinsuke Nakamura in the center of the ring despite the interference of both Sami Zayn and Cesaro.

Even Lacey Evans seems to be heading toward her first title. While her focus remained on Sasha Banks, Bayley was in her way with gold in hand.

This was a night that pushed the brand forward and promised plenty of excitement to come.

John Morrison has always been one of the most exciting athletes in wrestling. He's almost too good for his own good. The way he can make anything look effortless is incredible, and that was showcased Friday via his somersault axe kick on Big E.

The Shaman of Sexy has not been slouching in his time away from WWE. He has improved in the ring with other promotions and found his voice on the mic. He is more complete than he was then, even if he's still going to struggle next to The Miz.

SmackDown's next edition should be awesome to watch, as Morrison gets to step back into a WWE ring. He has the potential to do things no one else can. However, he can't reveal all his tricks off the bat.

The end goal is The New Day vs. Miz and Morrison, which should be a fun repeat match to define this new rivalry. The heels have as much chemistry as they ever had and have the credibility needed to rival Kofi Kingston and Big E.

At some point, Xavier Woods will return, and Kofi should go back to the main event scene at that point. Why not let Miz and Morrison help along that transition by taking over SmackDown as a team?

After a month away because of a Wellness Policy suspension, Robert Roode ended SmackDown on top by getting the last laugh on Roman Reigns. He hit a spinebuster on the announce table that allowed Dolph Ziggler to send The Big Dog through the table with a standing elbow drop.

The Glorious One's time off gave him an air of importance that he has not had in years. His return in the main event was the biggest angle he has been involved with in months. He also clearly spent his time away training; he looked as good as he ever has in WWE.

While King Corbin is still the central heel, Ziggler and Roode have a better chance of making an impact together than apart nowadays. The Showoff was not the same working as The King's only ally.

The Revival also played a small role in this story, and it is likely The Big Dog will need a few more allies by his side to finally put down Corbin for good.

Since Reigns can't add more family members, the best bet might be Heavy Machinery since Otis and Tucker have a beef with Ziggler.

Braun Strowman did not care who was in his way against Shinsuke Nakamura. He ignored a distraction from Cesaro. He brushed off Sami Zayn's involvement. He picked up the intercontinental champion and slammed him into the mat to pin him once again.

Every week, The Monster Among Men takes a step closer to his destiny. The same could be said of The Artist, who is holding a title that doesn't feel like it is his.

Nakamura has had a rocky run in WWE with many highs and lows. An alliance with The Critic of the Critics was supposed to keep him relevant, but it's just meant he loses on TV even more.

Strowman and Nakamura do not have great chemistry, and the frequent interference is an attempt to mask that. This isn't the grand feud The Monster deserves before capturing his first single title.

The sooner the rivalry ends, the better for all involved. Strowman can find opponents better suited to his skill level, and maybe Cesaro and Nakamura can find teams that they can defeat reliably.

Lacey Evans wanted to fight Sasha Banks, but Bayley appeared on the Titantron to announce The Legit Boss was not in attendance. The Sassy Southern Belle found the SmackDown women's champion's locker room, and the two brawled, with The Role Model retreating.

In a limited women's division, The Lady is feuding with both Bayley and Banks at the same time. Despite The Role Model being the champion, Evans wants The Boss more.

The SmackDown women's champion is just an obstacle for Evans to get to the true prize. Stories like these devalue the title because the challenger might only win the gold as a byproduct of wanting to get to someone else.

Bayley should not be an afterthought. If the story is Evans vs. Banks, give the SmackDown women's champion a different opponent to work with. Dana Brooke is free.