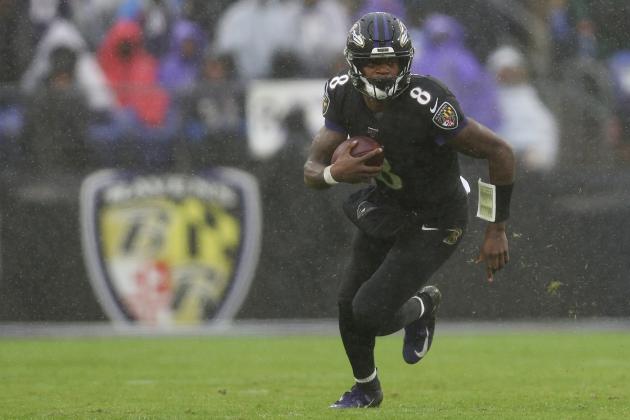 The San Francisco 49ers suspended radio analyst Tim Ryan for one game after he made racist comments about Baltimore Ravens quarterback Lamar Jackson, according to the San Francisco Chronicle's Matthias Gafni and Lauren Hernandez.

During a segment on KNBR's Murph and Mac on Monday, Ryan referenced Jackson's skin color and said it benefited him when faking handoffs during games:

"He's really good at that fake, Lamar Jackson, but when you consider his dark skin color with a dark football with a dark uniform, you could not see that thing. I mean you literally could not see when he was in and out of the mesh point and if you're a half step slow on him in terms of your vision forget about it, he's out of the gate."

The 49ers provided a statement to the Chronicle addressing Ryan's comments.

"We hold Tim to a high standard as a representative of our organization and he must be more thoughtful with his words," the team said. "Tim has expressed remorse in a public statement and has also done so with us privately. We know Tim as a man of high integrity and are confident he will grow and learn from this experience."

Ryan also spoke to the paper and said, "I regret my choice of words in trying to describe the conditions of the game. Lamar Jackson is an MVP-caliber player and I respect him greatly. I want to sincerely apologize to him and anyone else I offended."

Jackson is closing in on Michael Vick's single-season record for rushing yards by a quarterback (1,039). He has run for 977 yards and seven touchdowns through the first 12 games of the season.

To better tailor the offense to Jackson's skill set, the Ravens have relied on option plays that allow the MVP candidate to read the defense and decide whether to hand the ball off to the running back or keep it and run.

Jackson scored on a one-yard touchdown run in the second quarter of Baltimore's 20-17 win over the 49ers. His fake handoff to Gus Edwards occupied the defense's attention and cleared a path to the end zone.

Ryan's suspension will keep him off the broadcast for the 49ers' Week 14 matchup against the New Orleans Saints. He'll resume his analyst duties when the team plays the Atlanta Falcons on Dec. 15.

Ryan played four years for the Chicago Bears before retiring in 1994. The 49ers hired him as an analyst in January 2014.

Follow San Francisco 49ers from B/R on Facebook and get the latest updates straight to your newsfeed!

We'd like to send you the most entertaining San Francisco 49ers articles, videos, and podcasts from around the web.