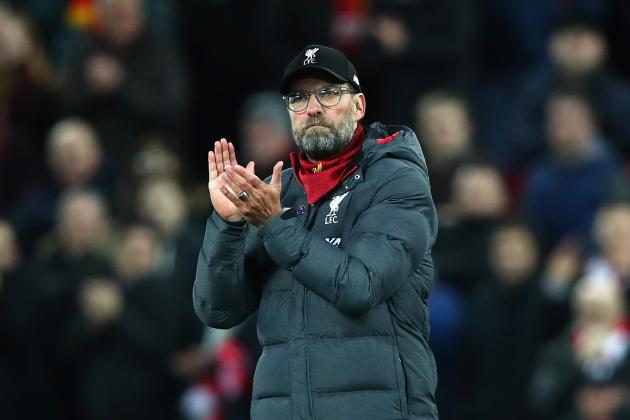 However, Klopp's gambit looked like an inspired move after replacements Divock Origi and Xherdan Shaqri combined for three goals as Liverpool beat Everton 5-2 at Anfield. The Reds are still eight points ahead of the chasing pack in the title race, even though Leicester City moved back into second after beating Watford 2-0 at the King Power Stadium.

Liverpool's gain looks like being Marco Silva's loss, with the Everton chief seemingly closer to the boot after the Toffees dropped into the bottom three. Everton have won just four league games so far this season and are in free-fall on Silva's watch.

Leicester's place in the top four looks secure, but Manchester United haven't given up hope of qualifying for next season's UEFA Champions League. The Red Devils overcame Tottenham Hotspur 2-1 at Old Trafford thanks to a brace from Marcus Rashford, who ruined Spurs manager Jose Mourinho's return to Manchester.

United are up to sixth, but remain eight points adrift of Chelsea in fourth, after the Blues beat Aston Villa 2-1 at Stamford Bridge. Frank Lampard's men won largely because of the way they kept Villa star Jack Grealish quiet.

Consigning attacking talisman Salah and chief creative force Firmino to the bench was the kind of decision sure to leave Klopp open to a storm of criticism had Everton earned a result.

It wasn't to be, though, with Origi once again showing how much he loves this derby. The Belgian scored twice to help Liverpool build a 4-2 lead at the break:

Wins for all of the top 7 in the #PL during this action-packed midweek pic.twitter.com/W4gs95qVtr

Origi sandwiched his goals around a deft finish from Shaqiri, who celebrated his first league start since January in style. The 28-year-old former Stoke City wing wizard reminded Klopp he's also enjoyed scoring against the Toffees:

Klopp had set himself up for a fall but ended up looking like the ultimate tactician. His selections had paid off handsomely while key man Salah was afforded a complete rest.

Getting decisions like these right can prove crucial in the title race. It's a race Liverpool already own after Origi and Shaqiri underlined the squad depth strong enough to propel the Reds to a first top-flight title since 1990.

While Liverpool are on an upward trajectory, their neighbours are only trending one way, and it spells bad news for Silva's job prospects. The 42-year-old has overseen a nightmare 15 games for a club that's spent big on his watch.

Yet Silva has struggled to effectively communicate his ideas to big-money imports such as Moise Kean, Yerry Mina and Alex Iwobi. Mason Holgate's comments in the wake of yet another defeat were telling about the disconnect between what Silva wants and what his players are producing:

Silva had entered the game under heavy pressure following consecutive defeats to Norwich City and Leicester. Now the former Olympiacos and Watford boss seems mere minutes away from the chop, although Dominic King of the Daily Mail has rightly called out recruitment guru Marcel Brands for his part in Everton's woes:

As Silva awaits fate, #EFC defender Holgate claims responsibility. "The manager has told us what we need to be doing and we have not gone out and done that." https://t.co/0EVwqdqqv0

The Toffees need a refresh, and ditching Silva looks like the first necessary step.

There is rarely a shortage of people willing to explain why Rashford is far from elite. He's not a consistent finisher, nor a natural centre-forward, the list goes on.

One person determined to prove the naysayers wrong is the player himself. In fact, the England international is finding motivation from his detractors:

Marco Silva obviously carries the burden for this all but what about Marcel Brands now? This was his big summer and not one of the signings has worked - yet. Quite revealing, too, that Farhad Moshiri never showed up this evening. Club have no answer why 🔵

Rashford continues to put up eye-catching numbers, with his two goals to down Spurs part of a lengthy purple patch:

Doubters just spur me on 🤷🏾‍♂️

There was a coolness about the way Rashford took his goals on Wednesday, particularly the 49th-minute penalty that ultimately proved to be the Red Devils' winner. United's prolific No. 10 tucked the spot-kick into the bottom corner to highlight the level of ruthless efficiency he has reached on Ole Gunnar Solskjaer's watch this season.

It was fitting Rashford showed off his wares with Mourinho watching on. The man still getting used to life in the Spurs hot seat didn't always trust Rashford to start before he was sacked by United last December:

Stepped up in a big way. 🔥🔥🔥 pic.twitter.com/9GPbwfeW0K

As a sidenote, Rashford's goals made it eight conceded by Tottenham in the four matches since Mourinho replaced Mauricio Pochettino. From United's perspective, 22-year-old Rashford is still young enough to keep improving and eventually fulfil his obvious potential.

Prior to the game at Stamford Bridge, Lampard had said Grealish being called up to the England squad is "a matter of time," per Goal's Nizaar Kinsella. Those words added to the hype that's been building around Villa's creative heartbeat this season.

Grealish has been meriting the praise, particularly after the classy No. 10 thrived during Sunday's 2-2 draw with United at Old Trafford. Even so, United's struggles meant Grealish was still under pressure to deliver against a team further up the table.

The trip to Stamford Bridge represented a perfect chance, but Grealish struggled to sparkle. His quick feet and trickery were still obvious, but the 24-year-old rarely escaped the aggressive attentions of a robust Chelsea midfield.

Since the start of last season, Marcus Rashford has scored more goals against Jose Mourinho at Old Trafford (2) than he has under him (1).

Instead, Grealish was upstaged by Chelsea's Mason Mount. The latter got on the scoresheet for the Blues and likely remains ahead of Grealish in the pecking order for Gareth Southgate's Three Lions squad.

Grealish is the more naturally gifted player, but he appears to be fighting an uphill battle for international recognition, particularly with Tottenham's Dele Alli and Leicester's James Maddison playing his position.

Villa's talisman in the final third will need a few more star turns against the division's big names before his quality is rewarded.