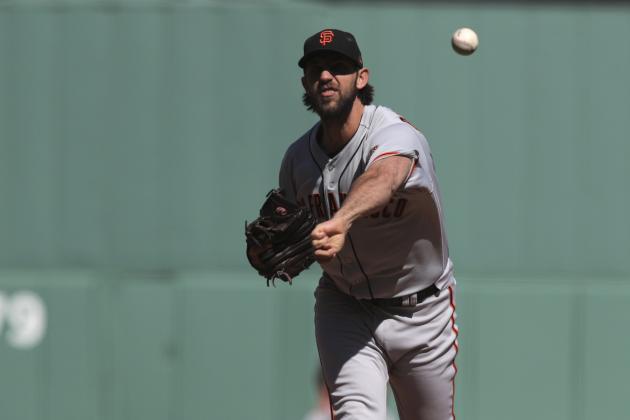 Madison Bumgarner reportedly is about to become a very rich man.

On Wednesday, Bob Nightengale of USA Today reported two Major League Baseball executives said they believe the starting pitcher will land a contract worth at least $100 million in free agency this offseason. Those around the league consider him the third-best starting pitcher on the market behind Gerrit Cole and Stephen Strasburg.

Those executives also believe the Philadelphia Phillies and Atlanta Braves will not be in the running for the southpaw after signing Zack Wheeler and Cole Hamels, respectively.

This comes after Jeff Passan of ESPN reported the Phillies signed Wheeler to a five-year deal worth $118 million.

"I wouldn't even be surprised if he gets more than Wheeler," one of Nightengale's sources said of Bumgarner. "It will be close. There’s really not that big of a difference when you look at it closely."

The one thing Wheeler has going for him over Bumgarner is his age, but he is just one year younger than the career-long member of the San Francisco Giants at 29. He also hasn't started building a Hall of Fame resume and has dealt with more injury concerns throughout his career.

Nightengale noted Bumgarner will likely not get his preference of staying with the Giants because the National League West team is rebuilding and won't commit that type of money to a 30-year-old starting pitcher.

That is welcome news for other teams in need of starting pitching depth seeing how Bumgarner is a three-time champion, four-time All-Star and postseason legend with a World Series MVP and National League Championship Series MVP to prove it.

Some team is apparently going to significantly reward him for those efforts.