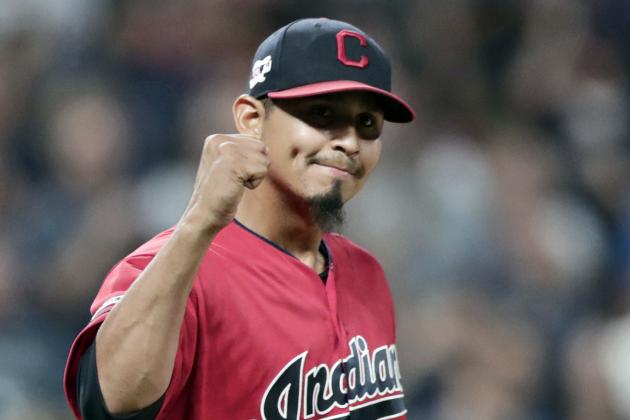 As if there was ever a doubt …@Cookie_Carrasco has been named the AL Comeback Player of the Year!

... On #NationalCookieDay no less! 🍪 pic.twitter.com/z5LBorBdWh

Congratulations to @BringerOfRain20 for being named 2019 NL Comeback Player of the Year! pic.twitter.com/Xkv5patnfg

On July 6, Carrasco disclosed he had been diagnosed with leukemia in May:

"This is going to make me stronger than I've ever been." - Carlos Carrasco

He returned to the field in September, appearing in 11 games over the final month of the season.

Carrasco penned an emotional article for The Players' Tribune on Sept. 27 detailing his leukemia diagnosis, treatment and return. In it, he described the moment he told his Cleveland teammates:

"When they got the news, the whole room went silent.

"It was the quietest I've ever heard our clubhouse. No one said anything. It seemed like no one even moved or made a sound with their shoes or coughed or anything. It was just complete silence. I said a few words about coming back stronger than ever, and then our trainer finished with some more details about my treatment.

"As soon as I was done talking, Francisco Lindor walked right over to me. 'You're not alone in this,' he said."

Carrasco returned to the mound on Sept. 1 and was given a standing ovation by the opposing Tampa Bay Rays crowd at Tropicana Field. The 32-year-old right-hander pitched one inning, giving up two hits and allowing one run.

Donaldson, meanwhile, appeared in 155 games for the Braves in 2019 after his 2018 campaign was limited to 52 games due to right shoulder inflammation and a calf injury.

Donaldson's performance put him in position to reject the Braves' qualifying offer and test free agency. Atlanta general manager Alex Anthopoulos has made it clear that the team, which Donaldson grew up cheering for, would prefer to bring Donaldson back. The three-time All-Star will be much more expensive this time around.

The Indians don't have to worry about retaining their Comeback Player of the Year, as Carrasco is locked in through 2023.