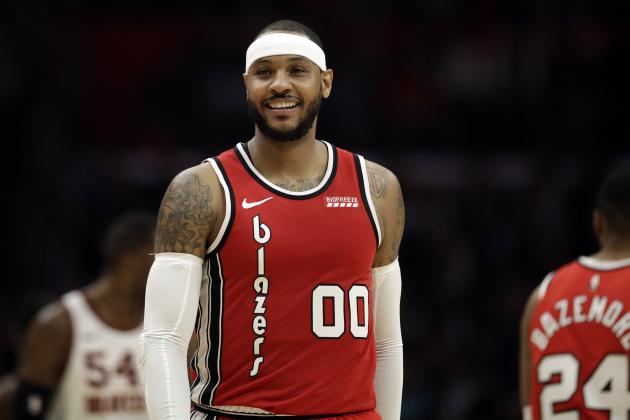 Carmelo Anthony is blocking out the haters who criticized the fact that he was named Western Conference Player of the Week on Monday.

"I've seen the chatter, but I won't allow myself to pay attention to that because I've come too far to start listening to that bulls--t, to be honest with you," Anthony told Yahoo Sports' Chris Haynes. "I won't allow that negativity to creep in. I've worked so hard to get to that point mentally and emotionally. I won't even let it happen."

The Houston Rockets only played two games, however, with Hayes reporting "the league seldom awards a player who played in just two games for the week," which hurt Harden's chances.

In general, getting worked up about the Player of the Week winners is frivolous. Almost everybody forgets the results by the end of the season, and it's not a metric that carries any weight when evaluating a player's career achievements.

Player of the Week is arguably more of a symbolic honor, and the same can be said for Player of the Month. As the Atlanta Hawks were on their way to 60 wins and the top seed in the Eastern Conference in 2014-15, DeMarre Carroll, Al Horford, Kyle Korver, Paul Millsap and Jeff Teague all shared Player of the Month in the East in January 2015.

Giving Anthony the Player of the Week in the West was a reflection not only of his performance but also the impressive nature of his comeback. He hadn't played in over a year before signing with the Blazers, and now he's establishing himself as a valuable member of Portland's rotation.

It can not be overstated how much Carmelo Anthony has helped the Blazers. Their spacing, cutting and passing for past two games has been at another level. Still early in this venture, but boy looks like this could be fun. He’s been really good for them.

Carmelo Anthony has just been named the NBA's Western Conference Player of the Week. No matter what happens from here, that's flat-out remarkable and says a tremendous amount about not just what he's still got, basketball-wise, but his mental discipline as well.

The 35-year-old probably won't make it two weeks in a row, though.

He shot 2-of-9 from the field and scored nine points as the Blazers lost 117-97 to the Los Angeles Clippers on Tuesday.

Follow Portland Trail Blazers from B/R on Facebook and get the latest updates straight to your newsfeed!

We'd like to send you the most entertaining Portland Trail Blazers articles, videos, and podcasts from around the web.