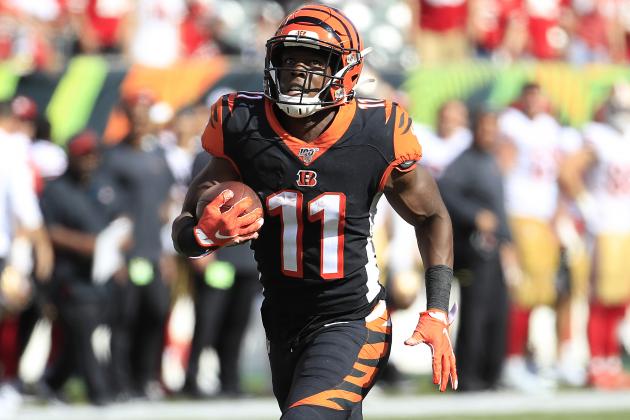 Cincinnati Bengals wide receiver John Ross told reporters Wednesday that his chest injury suffered Week 4 against the Pittsburgh Steelers was inches away from puncturing an artery.

"I asked him, 'Could it be life-threatening?' And he said, 'Definitely,'" Ross said of his conversation with his doctor. "He said it was a couple inches off or something like that from hitting the artery. I didn't want to know anymore after that. I said, 'As long as you fix me, I'm fine.'"

Ross was placed on injured reserve and missed the last eight games after suffering the clavicle injury. He had been on pace for a career-best season before going down, catching 16 passes for 328 yards and three touchdowns in four games.

The 2017 first-round pick has missed extended time throughout his NFL career, missing a total of 24 games over three seasons. Those issues have prevented Ross from developing into the type of downfield star the Bengals envisioned when they plucked him and Tyler Boyd as the heir apparents to A.J. Green in back-to-back drafts.

Boyd says it's unclear how much he will play in his first week back in the lineup.

"It's hard to put things in perspective because it's been so much time," Ross said. "I definitely feel I can contribute, and I definitely will put my best forward to go out there and do everything I can to help us win."

The 1-11 Bengals are coming off their first win of the season and travel to Cleveland to face a frustrated Browns team that's been one of the year's biggest disappointments. It's unlikely Ross will burst out with a huge performance in his first week back, but it has to feel good for him to be on the field given the grim alternative.

We'd like to send you the most entertaining Cincinnati Bengals articles, videos, and podcasts from around the web.