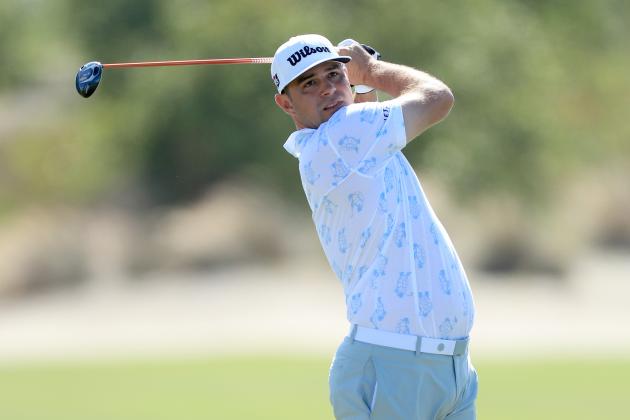 Gary Woodland and Patrick Reed each fired a six-under 66 to grab a share of the lead after Wednesday's first round of the 2019 Hero World Challenge at the Albany Golf Course in New Providence, Bahamas.

Woodland and Reed hold a two-shot advantage over Chez Reavie (-4) in the exclusive 18-player tournament hosted by Tiger Woods. There's a four-way tie for fourth at three under between Justin Rose, Justin Thomas, Rickie Fowler and Henrik Stenson.

This year's event is also serving as the final tune-up for several American players before the 2019 Presidents Cup, which takes place next week in Australia. Woods, who posted an even-par 72 in Round 1, will operate as a playing captain at Royal Melbourne Golf Club.

Woodland is wrapping up a strong 2019 that saw him secure his first major title in June at the U.S. Open and reach a career-best ranking of 12th.

The 35-year-old Kansas native recorded eight birdies and two bogeys in the first round.

Four birdies in his first six holes. 🐦@GaryWoodland is off to a strong start, leading the Hero World Challenge by two strokes.#LiveUnderPar pic.twitter.com/MOJWZWqElC

It appeared Woodland was going to hold sole possession of the top spot after 18 holes, but Reed enjoyed a late surge to become a co-leader. He recorded four straight birdies starting on the 13th hole to vault himself up the leaderboard from the middle of the pack.

Reed has finished in the top five at the Hero World Challenge in three of the past four years, but he's still looking for his first triumph in the event.

Third birdie in a row to start the back nine.@GaryWoodland's putter is on 🔥.

He leads by two. pic.twitter.com/4mmzD0gYtd

"I've been organizing these two weeks—working with my staff here, and then working with the Tour, and communicating with the guys for next week, making sure everything is in line," he told reporters. "It's long days, long nights. I'm still playing, too, so I gotta practice, I gotta train, lifting. It's burning the candle on both ends for two weeks in a row. It's gonna be tough."

The 15-time major champion struggled in the early stages of Wednesday's round with three bogeys as part of a two-over front nine. He started to find a serious rhythm on the back side, but dropped three shots over his final two holes to end his progress.

Age is just a number.

Conditions in the Bahamas were quite breezy throughout the opening round. The wind should subside Thursday with sustained speeds below 10 mph, a trend that carries through the rest of the tournament, according to the Weather Channel. That's going to create nearly perfect scoring conditions.

The average winning score is 20.25 under since the event moved to the Albany Golf Course in 2015. A final total in the range will likely be necessary again this year.

Television coverage of Thursday's second round begins at 1 p.m. ET on Golf Channel.