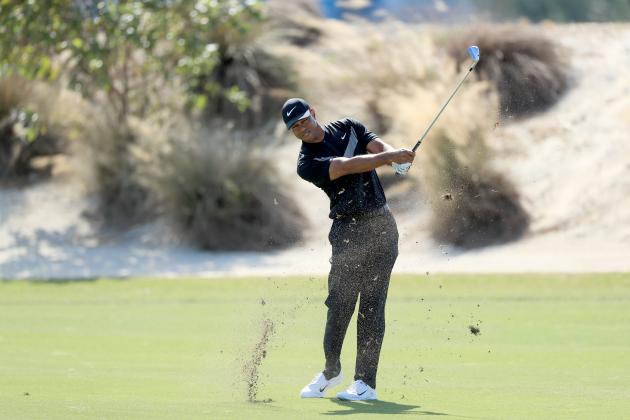 Tiger Woods has some work to do after an up-and-down first round of the 2019 Hero World Challenge in the Bahamas resulted in an even-par 72 on Wednesday.

After having captured victory at the Zozo Championship in October, it had been more than a month since the 15-time major champ had competed. And early on, he had to try to shake off the rust.

Woods hit an early bump in the road with a bogey on the third hole. He was able to get back to even with a birdie on hole No. 6, but he was unable to generate any momentum after that. Back-to-back bogeys to close out the front nine dropped him to two-over for the day.

At that point, he was heading in the wrong direction on the leaderboard—but then he made his way to the back nine.

Woods started to climb out of the hole thanks to a birdie on No. 11. He continued his ascent with consecutive birdies on the 13th and 14th holes, moving him to under par for the first time all day.

Age is just a number.

His highlight of the day came when he put himself firmly in the mix with an eagle on 15:

Birdie
Par
Birdie
Birdie
Eagle@TigerWoods is on the move. pic.twitter.com/O8W6ssQmH0

Shooting five-under over a five-hole stretch helped the 43-year-old move to within three strokes of the lead as he moved into a tie for fourth.

Unfortunately for the tournament host, his luck ran out as he suffered a disastrous ending to the opening round. A bogey on 17 put an end to his late-round surge, and a double bogey on 18 dropped him back down to even as he made his way into the clubhouse.

As Woods walked off the course, he found himself in a tie for 11th place, six strokes back of both Gary Woodland and Patrick Reed.

Woods' back-nine surge appeared to have him right in the mix, but his inconsistency proved costly. Now, he will have to hope to limit the mistakes on Friday if he is going to make a run at the top spot.