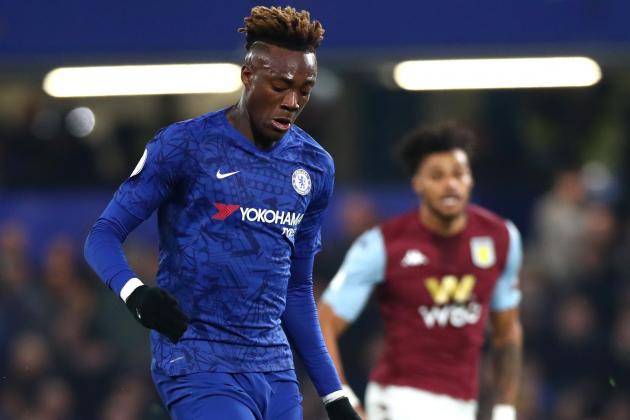 Tammy Abraham found the net for the Blues, and he also assisted a goal for Mason Mount after Trezeguet had drawn Villa level. The result means Chelsea now hold a six-point advantage over the chasing pack in the race to qualify for next season's UEFA Champions League.

Chelsea were out of the blocks quickly, shifting the ball at speed and getting runners in space on the overlap. One of those runners, Willian, found enough room to sting the palms of Villa goalkeeper Tom Heaton with a thunderous strike hammered toward the near post.

The chance proved a warning the visitors didn't heed, and the Blues went ahead after 24 minutes thanks to the youth movement Frank Lampard has made central to his team. Reece James, 19 lifted in a cross for Abraham, and the 22-year-old centre-forward comfortably rose above Heaton to head in against the club he enjoyed a fruitful loan spell with last season.

Abraham was back among the goals, but Goal's Nizaar Kinsella attributed the finish more to Villa's slack defending:

A really simple goal but it had been coming. 12th goal for the season for Tammy Abraham. 11th in the league. He is back to the outright second top scorer in the Premier League. Villa awful to not close down the cross or mark the striker. None celebration from Tammy #CFC #CHEAST

The away side offered little in response, and Chelsea missed a couple of chances to double the lead. On both occasions Abraham couldn't link up with midfield runners, paying a ball behind Christian Pulisic on the break, before failing to connect with Mount.

Chelsea paid for their profligacy when Jack Grealish and John McGinn played a cute one-two and released Ahmed Elmohamady to cross. His pinpoint delivery found Trezeguet, who somehow managed to bundle over from close range.

Trezeguet has just equalised at Stamford Bridge with a goal that - I think - came off his head, his left foot *and* his right foot. #PerfectHattrick

Villa had caught the Blues out against the run of play, but Chelsea recovered sufficiently during the break to strike back a mere three minutes after the restart. The breakthrough came when Abraham finally got his link-play right and teed up Mount to apply a sensational strike:

Mount and Pulisic went close from distance inside the final 15 minutes, with Chelsea still firmly in control. Willian was next to pepper the Villa goal with a long-range effort, drawing a fine save from Heaton in the process.

A third goal would have settled the nerves, but Chelsea ultimately didn't need it. Instead, Lampard's youthful side continues to defy the doubters and out-perform established rivals like Manchester United, Tottenham Hotspur and Arsenal in the battle for places in the top four.

Chelsea will travel to Goodison Park to face Everton on Saturday, while Villa host in-form Leicester City on Sunday.