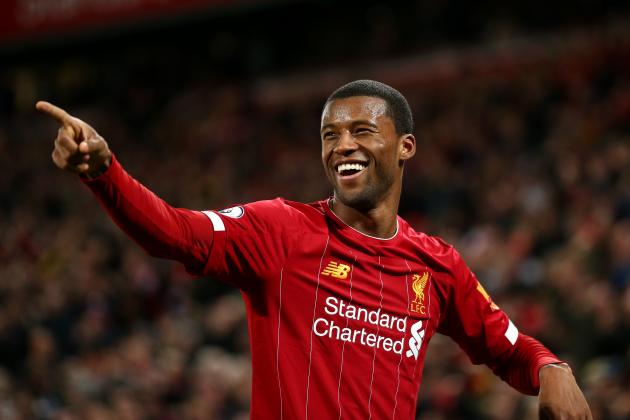 Liverpool thrashed Everton 5-2 at Anfield in the Merseyside derby to remain eight points clear at the top of the Premier League.

Leicester City remain in second place following a 2-0 win over bottom side Watford. Jamie Vardy netted his 14th Premier League goal of the season, while James Maddison added the second in stoppage time.

Jose Mourinho suffered his first defeat as Spurs boss at former club Manchester United. Two goals from Marcus Rashford gave the Red Devils all three points, and they moved above Spurs in the table.

Wins for all of the top 7 in the #PL during this action-packed midweek pic.twitter.com/W4gs95qVtr

Liverpool put five past Everton at Anfield to send the struggling Toffees into the bottom three of the Premier League and pile more pressure on manager Marco Silva:

1999 - Everton find themselves in the relegation zone after playing at least 15 Premier League matches for the first time since April 10th 1999 (after 32 games). Sinking. pic.twitter.com/Q6oYJHYNJQ

Reds boss Jurgen Klopp made changes to his side by bringing in Divock Origi and Xherdan Shaqiri, and both players were on target in an emphatic win.

Origi took just six minutes to open the scoring, rounding goalkeeper Jordan Pickford and slotting into an empty net. Mane then teed up Shaqiri to make it 2-0 on 17 minutes.

Michael Keane swiftly pulled one back to make it 2-1, but Origi grabbed his second when he controlled a long ball forward from Dejan Lovren and lifted the ball over Pickford:

Divock Origi has scored more goals against Everton (5) for Liverpool in the Premier League than Sadio Mane, Roberto Firmino and Mohamed Salah combined.

He just loves playing against the Toffees. 🔥 pic.twitter.com/TT1WnOWSLS

Another swift counter-attack was finished off by Mane just before half-time for his ninth Premier League goal of the season before Richarlison headed Bernardo's cross past Adrian in stoppage time.

Roberto Firmino teed up Georginio Wijnaldum for Liverpool's fifth in the 90th minute to keep the Reds unbeaten after 15 games and earn a club record:

RECORD: Liverpool have played 32 consecutive top-flight league games without losing a single one for the first time in the club’s 127-year history.

Leicester climbed back over Manchester City in the table by inflicting a ninth league defeat of the season on managerless Watford.

Vardy fired the Tigers in front from the penalty spot after Jonny Evans was fouled by Adam Masina:

Jamie Vardy's having a party 🎵 pic.twitter.com/OhNTEORx3Q

Leicester had to wait until deep into stoppage time to seal the win. Maddison broke clear and beat goalkeeper Ben Foster with 95 minutes on the clock.

The victory makes it seven straight Premier League wins for Brendan Rodgers' side and leaves the Hornets seven points from safety.

Meanwhile, Mourinho made his first return to former club Manchester United as Spurs manager and saw his side slip to their fifth Premier League defeat of the season.

Rashford curled a low shot past goalkeeper Paulo Gazzaniga at his near post after just six minutes in a dominant opening period from the Red Devils.

Gazzaniga also tipped a Rashford shot on to the crossbar as the England international caused the visitors all sorts of problems:

Dele Alli produced a moment of magic to get Spurs back in the game before half-time. The midfielder brilliantly controlled the ball after David De Gea had blocked Moussa Sissoko's shot, flicked it over his head and slotted home from close range:

His incredible form continues with another piece of magic. 💫 pic.twitter.com/FnXWU7893h

Manchester United hit back after the break through Rashford again. The 22-year-old was awarded a penalty after a foul by Sissoko and sent Gazzaniga the wrong way from the spot to secure the win.