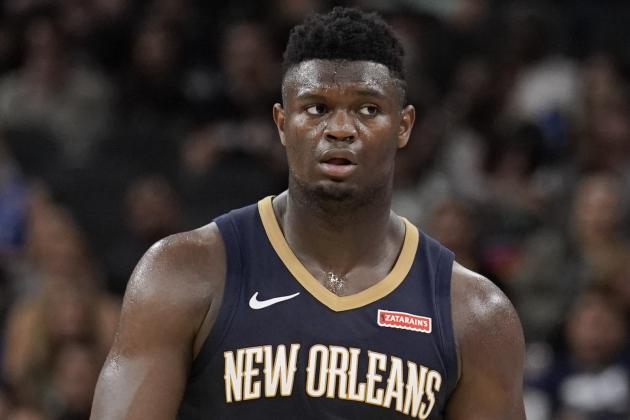 The wait is almost over.

Griffin said Williamson will not be on a minutes restriction when he returns.

The 2019 top overall pick has missed the first 41 games of the season after suffering a torn lateral meniscus during the preseason. It was a huge disappointment for both the Pelicans and NBA fans in general, as Williamson came into the league as one of the most hyped prospects in recent memory.

The 19-year-old was nothing short of phenomenal during his one season at Duke, averaging 22.6 points, 8.9 rebounds, 2.1 steals and 1.8 blocks per game, shooting an absurd 68 percent from the field and making a less absurd 33.8 percent of his shots from three.

His rim-rattling dunks and unique athleticism made him a household name:

Zion's #SCtop10 dunks and a whole lot more are coming to the NBA soon.

Relive all 62 of his slams 💪 pic.twitter.com/oPKuSftTwB

In his lone NBA Summer League game, he generated even more buzz:

He was having an excellent preseason before his knee injury, averaging 23.3 points and 6.5 rebounds while shooting a heady 71.4 percent from the floor. Those numbers, combined with a supporting cast that included Jrue Holiday, JJ Redick, Brandon Ingram, Lonzo Ball, Derrick Favors and Josh Hart, made the Pelicans an intriguing pick as a potential playoff team.

Without him, however, the Pelicans have gone just 15-26, though injuries to other players have also contributed to the team's slow start.

Getting back into the playoff picture in the West will be no small feat given the strength of the conference. But with Williamson back on the court, the Pelicans become one of the most intriguing teams in the NBA. All eyes will be on New Orleans and its high-flying rookie to see if he can replicate his success at Duke against NBA opposition.

And, more importantly, whether he can help lead the Pelicans back into the postseason conversation.

Follow New Orleans Pelicans from B/R on Facebook and get the latest updates straight to your newsfeed!

We'd like to send you the most entertaining New Orleans Pelicans articles, videos, and podcasts from around the web.