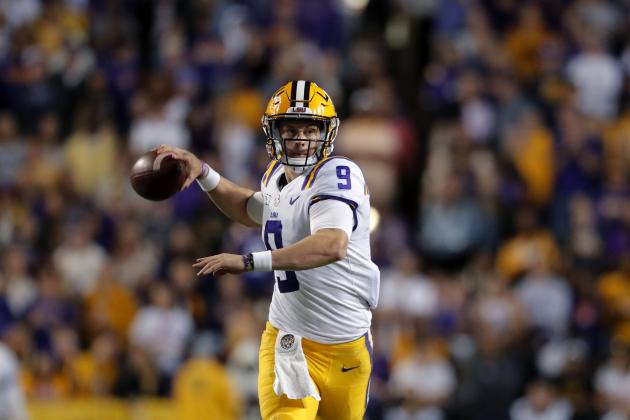 Prior to the start of the 2019 season, it seemed impossible that anyone not named Tua Tagovailoa or Trevor Lawrence would win the Heisman Trophy.

But after Week 8, we have some major shakeups at the top. LSU breakout quarterback Joe Burrow now leads the pack after picking apart Mississippi State.

Tagovailoa also slipped behind Jalen Hurts after suffering an ankle injury that knocked him out of the second half of Alabama's victory over Tennessee. Lawrence's odds have dipped far enough that he's now a longshot to get back into the race.

Remember, the following rankings are a reflection of what happened in Week 8―nothing more, nothing less. The lowest-ranked player isn't necessarily in danger of leaving the pack, though that happens to be the case this week.

Factors used to shape the order include individual production, key plays, team success and competition level. Accompanying odds are accurate as of Monday and courtesy of Caesar's.

Disaster struck for Alabama quarterback Tua Tagovailoa when a defender crashed onto his ankle prior to halftime in this week's win against Tennessee. The high ankle sprain required surgery and will keep him out at least through this coming week against Arkansas.

Tagovailoa performed decently against the Volunteers despite not picking up a touchdown for the first time since he became a starter for the Tide. His red-zone interception on their second drive was an ugly one thrown directly to Nigel Warrior. It would've been an easier mistake to overlook had he finished the game with the multiple touchdowns he normally produces.

Missing a game or two won't crush Tagovailoa's Heisman odds, so long as he dominates against LSU and Auburn. We'll have to wait and see if he's ready to square off with Joe Burrow on Nov. 9.

It's hard for a running back to win the Heisman in this pass-heavy era of football, but Jonathan Taylor is as good as they get. He surpassed the 5,000-yard mark for his career Saturday, making him the fastest-ever to do so.

Usually, his performance against Illinois would've kept him treading water in this race.

But instead, Wisconsin suffered a crucial loss right before facing Ohio State. Though Taylor had good production, his fumble in the fourth quarter led to a critical touchdown drive by Illinois. If he didn't fumble on third down and deep into Illini territory, the Badgers might have had a 40-yard field goal attempt with about seven minutes remaining.

Taylor is not fully out of the race, but he'll be on the brink of elimination if he can't dominate his next game.

What's next: at Ohio State

The Ohio State Buckeyes blew the doors off Northwestern on Friday night, overcoming any concerns that long grass and a stingy Wildcats defense could slow their powerful offense. Quarterback Justin Fields continues to thrive with efficiency and a steady supply of explosive passes, ranking third in ESPN's Total QBR metric.

He connected with budding star receiver Chris Olave twice, totaling 28 yards on those two scores, and he threw a 23-yarder to Austin Mack, as well. His touch on passes was as good as we've seen this year, making him extremely dangerous as a true dual-threat.

His biggest test yet awaits this week. Carving up Wisconsin would keep him right near the top of the odds list.

What's next: vs. Wisconsin

The difficulty of judging uneven performances is that it can often come down to the result of the game.

Justin Herbert wasn't the better quarterback for much of this outing against Jacob Eason and the Washington Huskies, as he struggled to throw deep and perform on third downs. But he made several clutch throws under pressure and kept the Ducks within striking distance until the end of the game.

Herbert's ability to avoid turnover-worthy throws and work within the offense was important this week. Had they lost, more attention would've gone to his unevenness throwing beyond 10 yards, especially to the left as he missed all six throws that distance and direction.

He played well enough to earn a massive victory on the road and keep Oregon in the College Football Playoff mix. But it wasn't the type of dominant performance that would've vaulted him upward in the conversation.

What's next: vs. Washington State

Few, if any, expected Texas to go down to the wire with lowly Kansas this past weekend. The Longhorns defense was shredded every way imaginable. But it was Texas quarterback Sam Ehlinger who stepped up and benefitted from the opportunity to put the team on his back.

Ehlinger mixed in several chunk gains through the air and on the ground, totaling just under 500 yards of offense by himself. His 43-yard touchdown pass to receiver Devin Duvernay was an excellent example of his poise under pressure and improvement throwing deep. He hit Duvernay in stride to put Texas up 10.

His Heisman odds are still pretty slim right now because of the loss to Oklahoma, but he looms in the background after this clutch performance.

What's next: at TCU

It's still incredible to see the video-game numbers Jalen Hurts is amassing every week for Oklahoma.

He led the team in rushing again this week on just 10 carries and only missed one pass. His mastery of the pocket and feel for when to run shows how his development has rapidly progressed throughout his career.

His accuracy, pre-snap reads and knack for rushing were on full display against West Virginia. He earned Big 12 Offensive Player of the Week for becoming the third quarterback in conference history to complete at least 90 percent of his passes while throwing for at least 300 yards and three touchdowns.

He made the Mountaineers look like a junior varsity team in his three quarters (and one play) of action.

What's next: at Kansas State

Say hello to your new Heisman favorite—at least for now as Joe Burrow prepares to face two top-10 foes, Auburn and Alabama, in back-to-back weeks. But based on his Week 8 showing against Mississippi State, he's certainly earned the distinction for the time being.

Burrow was once again unstoppable, showing incredible pocket presence to avoid rushers and discipline to keep his eyes downfield. His timing on quick passes was excellent as he threw a catchable pass on 15 of 19 attempts within 10 yards. The few deeper shots he took were also on the money, including his 37-yard touchdown pass to Derrick Dillon.

He has complete command of this offense, and it's flat-out wrong to say anyone has been a better quarterback to this point of the season. However, the next stretch of games will go a long way in determining his final Heisman odds.

What's next: vs. Auburn