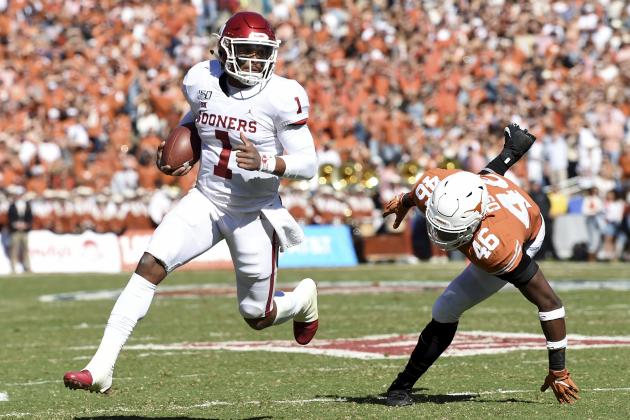 Down went Georgia as Will Muschamp finally earned his signature win with South Carolina. The Bulldogs were outmatched despite having the more experienced quarterback and star-laden roster, giving them a black eye that'll sting for a while after they climbed to third in the polls.

That was the tip of the iceberg of a busy college football day. LSU outdueled Florida in a key Top Seven matchup. Penn State had just enough to outlast Iowa, and Notre Dame avoided disaster against USC.

We also must mention Oklahoma's clutch win in the Red River Rivalry against Texas. Though it wasn't the offensive show we expected thanks to a slow first half, it featured an exciting ending that highlighted the Sooners' immense offensive firepower and improved defense.

All of that and plenty more had an impact on this week's rankings. Bleacher Report's panel of experts—Matt Hayes, David Kenyon, Adam Kramer, Kerry Miller, Joel Reuter and Ian Wharton—each submitted a ballot. A first-place vote is worth 25 points, followed by 24 points for second, 23 for third, etc.

The SEC had a tough day as Georgia fell, and there was inevitably going to be a loser of Florida at LSU. But the Big Ten went chalk, which is excellent for a conference hoping to get back into the College Football Playoff for the first time in several years.

Ohio State was off and is preparing for a weak Northwestern team Friday night. The rest of the major programs pulled off comfortable wins and will benefit in the Top 25 rankings from others falling.

Wisconsin, Michigan, Penn State and Minnesota all won. Their combined records improved to 23-1 to this point, forming what is the deepest competition in the nation despite shaky outcomes along the way. No other conference boasts such an impressive combined record from second through fifth place.

The Buckeyes still look like the cream of the crop, but they will have earned their spot in the CFP if they make it. Even Iowa has proved to be an elite defensive team despite its incredible offensive woes. There's also still room for others to improve.

Shea Patterson and Sean Clifford of Michigan and Penn State, respectively, can continue to ascend and raise the upside of their respective programs. And Wisconsin only needs one solid outing from Jack Coan against the Buckeyes to catapult into the Top Three.

This is looking like a special conference midway through the year.

The shocking manner in which the Georgia Bulldogs lost will continue to haunt the program. This was supposed to be their year to overcome Alabama after nearly doing so in recent years. Yet it was two South Carolina backup quarterbacks and stout defense that came away as stars instead of Jake Fromm.

Freshman quarterback Ryan Hilinski easily outplayed Fromm until Hilinski was hit low on a personal foul and knocked out of the game. The Gamecocks were able to survive with third-stringer Dakereon Joyner until overtime, when Bulldogs kicker Rodrigo Blankenship missed his second field goal of the game.

That was a disastrous loss for the conference.

With either LSU or Florida guaranteed to be knocked off as well, it was the home favorite that proved its worth as the second-best team in the conference. Joe Burrow (293 passing yards, 3 TD) and Clyde Edwards-Helaire (134 rushing yards, 2 TD) had big games against a great Florida defense, allowing them to outlast a surprising performance from the Gators offense. Now, LSU is cemented near the top of the rankings with Alabama.

Auburn looms and, yes, Georgia will still be a factor in the conference title race. But the playoff race should now feature only the top two SEC competitors.

Though the Pac-12 isn't stocked with any serious CFP contenders because of early losses and conference cannibalization, the league's put out some excellent football. Week 7 almost featured a clean sweep as far as favorites pulling out a victory. All three ranked teams earned key wins.

Oregon won in convincing fashion behind an excellent Justin Herbert and ball-hawking defense Friday night. Colorado entered the game as a potential upset candidate thanks to the upside that quarterback Steven Montez and receiver Laviska Shenault Jr. give to an offense, but Oregon was laser-focused throughout the game, running up a 42-point home victory.

No. 15 Utah pulled Oregon State through the mud in a blowout as well. The Utes are as good as any Northern team not named Ohio State, and their loss to USC is proving costly as they continue to rack up wins. They possess an elite defensive unit and balanced offense that give them the chance to win against each team remaining on their schedule and potential Rose Bowl foe.

The wild card of the group is Herm Edwards' Arizona State Sun Devils. They earned a tough home win against Washington State, with freshman quarterback Jayden Daniels leading a fantastic comeback. They're lurking in the shadows now at 5-1.

Finally, even USC was impressive in a loss at Notre Dame. The Trojans battled the shaky Irish as well as anyone could have expected, showing out with a bounce-back second-half performance.

While Week 7 was dominated by AP Top 25 showdowns that shook up everything we thought we knew about the CFP landscape, Week 8 will be more about how teams react as emotions die down. These "letdown games" can further blur the list of teams we feel are contenders—or eliminate those already sitting with one loss.

The SEC is especially stacked with tough follow-ups to their showdowns. Georgia hosts Kentucky, LSU travels to Mississippi State, and Florida must go see its ex-coach, South Carolina's Will Muschamp, who is fresh off his signature win against Georgia. These could decide who Alabama faces in the conference championship game.

Arizona State and Utah battle in a critical Pac-12 game—though it's far from a letdown matchup, as the Sun Devils narrowly avoided an upset by Mike Leach's Washington State Cougars in Week 7, and Utah crushed Oregon State. We'll also see how North division leader Oregon plays at Washington in a battle of future NFL quarterbacks (Herbert and Jacob Eason).

We know upsets define the playoff picture each year, but predicting which ones is a tall task. Week 8 has the chance to either reassure us that we know how the field stacks up or show us we knew nothing at all.